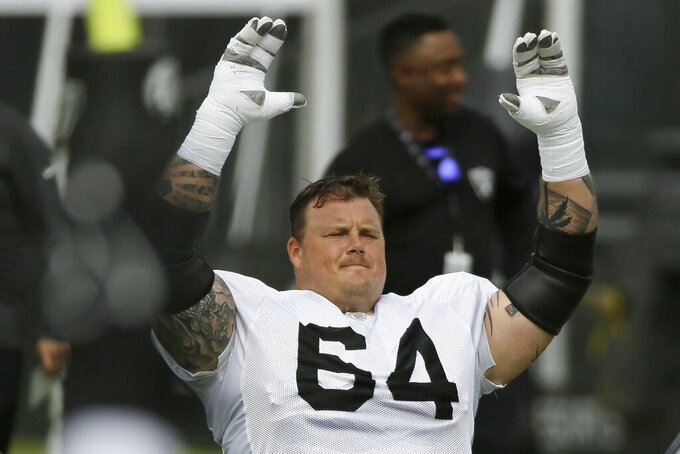 ALAMEDA, Calif. (AP) — Oakland Raiders left guard Richie Incognito practiced for the first time Wednesday after returning from a two-game suspension and said he's anxious to play. He's just as eager to leave his long history of troubles on and off the field in the past.

"The suspension's behind me, all the negative stuff is behind me. Just eyes forward, staying positive," Incognito said. "Relishing the opportunity, enjoying every day in here because you don't know how many more you're going to have. And wanting to play well. Just really want to charge forward and make it right."

It's a second restart with Oakland for Incognito, who signed with the Raiders in the offseason and spent all training camp working with the starting offense before heading to Arizona to work out while serving the suspension for violating the league's personal conduct policy.

While Incognito was out, the Raiders had mixed success offensively. Oakland was crisp in a season-opening win against Denver but fell flat after a fast start against Kansas City in Week 2.

Heading into Sunday's game in Minnesota, the Raiders are seventh in rushing behind rookie Josh Jacobs and 11th in overall offense.

Incognito doesn't think it will be a big adjustment to slide back into the starting offensive line, considering the time he spent practicing with the rest of the unit in training camp and the preseason.

"I played a lot of football in this league so I really don't anticipate it being an issue," Incognito said. "I've made a lot of starts. It's pretty much all systems go. I'm just hoping to come back and add some nasty edge to that group, get after some people, put some people on the ground and get Josh going."

Coach Jon Gruden welcomed Incognito back two days after saying the four-time Pro Bowl pick's return would be a jolt for an offense that is banged up. Jacobs (sore hip) joined right tackle Trent Brown (knee) and wide receivers Tyrell Williams (hip), J.J. Nelson (ankle) and Dwayne Harris (ankle) on the injury report. Brown and Harris were held out of practice Wednesday while the other three were limited.

"We didn't have as much full-speed work today as we normally do because of the injuries but we increased the reps," Gruden said. "We increased the communication opportunities for Richie to get wired back in. All indications are good."

For Incognito, it's another attempt at a fresh start after multiple suspensions and legal problems off the field. Unlike when he first signed with the Raiders, there is no looming discipline to deal with. No more working out alone or watching games from his couch, critiquing plays and rewinding the video to get better looks.

Incognito hasn't played in the NFL since a Jan. 7, 2018, playoff game while with Buffalo. The 36-year-old said he is taking nothing for granted.

"It'll be emotional for me and my family," Incognito said. "It's been a long trip to get back here. We're just checking another box."

The Raiders could be getting more help for their offensive line. Right guard Gabe Jackson, who has not practiced since suffering a right knee injury early in training camp, continues to make steady progress and could be cleared soon.

GRUDEN UNHAPPY: Because their Oct. 6 home game against the Chicago Bears was moved to London, the Raiders won't play in Oakland again until Nov. 9. They have a bye week following the game at Wembley Stadium, followed by two more road games. Gruden didn't sound too happy when asked about it. "Still trying to understand how that happened," he said. "We just have to showcase our mental toughness and deal with it. It's uncommon, maybe unprecedented, maybe unrealistic that this should ever happen in pro football. I'm not excited about it but we'll adapt and do the best we can."