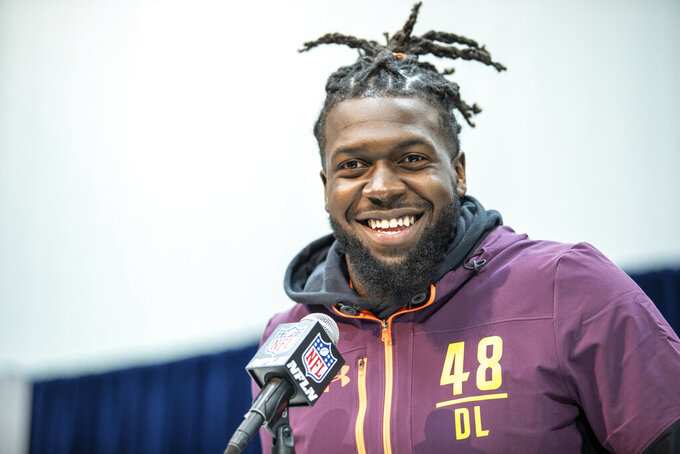 Florida defensive lineman Jachai Polite talks to the media at the NFL Scouting Combine on Saturday, March 2 2019 in Indianapolis. (Detroit Lions via AP) 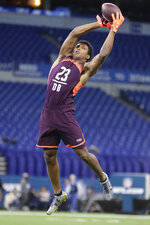 INDIANAPOLIS (AP) — Receiver D.K. Metcalf showed off his muscle-man physique — and his speed — in Indianapolis.

The two pro prospects from rival colleges in Mississippi left the NFL's annual scouting combine as the two biggest winners of the weeklong event. They were impressive.

The comment could tip off the Jets' plans for the No. 3 pick in April's NFL draft, considering quarterback Sam Darnold will be entering his second season in the league this fall.

And who could blame them for taking Metcalf, who possesses rare athleticism for a receiver that measures in at 6-foot-3 3/8, 238 pounds and has 1.6 percent body fat.

His performance was even better. After wowing scouts by doing 27 reps on the bench press at 225 pounds, he posted a vertical jump of 40 1/2 inches, a broad jump of 11 feet, 2 inches, and the 40-yard dash time — all top-five performances among the receivers.

What made it even more impressive for the son of former NFL offensive lineman Terrence Metcalf was that he did all of it after having season-ending neck surgery last fall.

Meanwhile, Sweat, the former Mississippi State defensive lineman, made his workout look like it was, well, no sweat.

The 6-foot-6, 260-pound Sweat was clocked at 4.41 seconds in the 40, the top speed by a defensive lineman since at least 2003 and faster times than those posted at the combine by Amari Cooper, Julio Jones or Odell Beckham Jr. Sweat also finished fourth among edge players in the broad jump (11 feet, 2inches) and three-cone drill (7 seconds flat) and was sixth in the vertical jump (36 inches).

The only question might be his strength. He did 21 reps on the bench press, 12th at his position.

The offensive and defensive linemen are supposed to be the strength of this draft. The combine proved it.

Defensive end Nick Bosa and defensive tackle Quinnen Williams of Alabama put themselves in the conversation to be the top overall pick with strong showings. Bosa completed the 40 in 4.79 seconds and did 29 reps on the bench press. Williams, at 303 pounds, ran the 40 in 4.83 seconds.

Michigan's dynamic duo of defensive end Rashan Gary and linebacker Devin Bush also helped themselves with strong showings Sunday. Gary ran a 4.58 in the 40 — No. 1 among defensive linemen — while Bush posted a 4.43.

Center Garrett Bradbury of North Carolina State and offensive tackle Andre Dillard of Washington State had the best performances Friday, the first full day of workouts in Indy. Both helped themselves with good performances in the 40 and demonstrated their agility with solid times in the three-cone drill and 20-yard shuttle. Bradbury also had 34 reps on the bench press, second among offensive linemen.

At least four players couldn't finish their workouts because of injuries, including potential first-round pick Jachai Polite from Florida.

The outside linebacker came to Indy with high expectations but ran the 40-yard dash in 4.84 seconds, slower than inside linebacker Manti Te'o in 2013, whose 4.82-second run helped him slide into the second round. Polite stopped after hurting his hamstring and will have to try and rebuild his stock before the draft.

Highly rated defensive tackle Dexter Lawrence of Clemson didn't finish because of a minor thigh injury in his left leg, and his college teammate, linebacker Tre Lamar, hurt his right shoulder on the bench press.

Top cornerback Greedy Williams of LSU did not compete after suffering cramps Monday.

But the most serious injury may have come Sunday when Ohio State cornerback Kendall Sheffield suffered a torn pectoral muscle, NFL Network reported. Sheffield did not work out Monday.

And scouts may be hard-pressed to find breakaway runners in this draft class. Though Josh Jacobs of Alabama did not run Friday, the fastest back in the group was Justice Hill of Oklahoma at 4.40. Ryquell Armstead of Temple was second at 4.45.

Questions about Lawrence's suspension for using a banned substance, which kept him out of the College Football Playoff, continued in Indianapolis. And Lawrence acknowledges the surprise results of his previous test have made him wary.