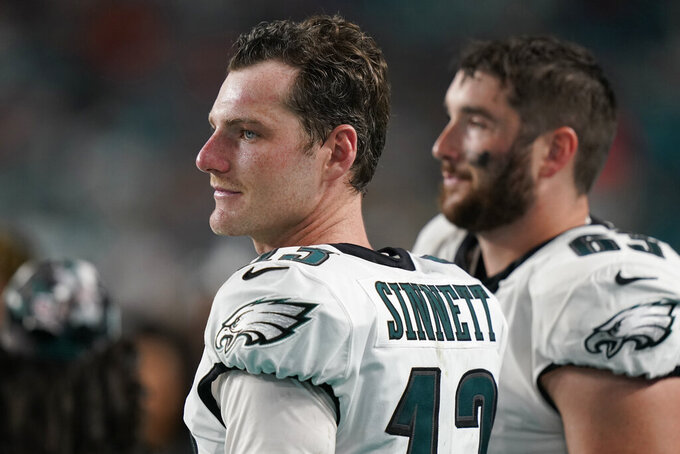 Philadelphia Eagles quarterback Reid Sinnett (13) watches the game from the sidelines during the second half of a NFL preseason football game against the Miami Dolphins, Saturday, Aug. 27, 2022, in Miami Gardens, Fla. (AP Photo/Lynne Sladky) 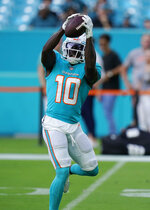 MIAMI GARDENS, Fla. (AP) — Tua Tagovailoa connected with Tyreek Hill for 51 yards on the first play from scrimmage, and the Miami Dolphins set a franchise record for points in a preseason game, beating the Philadelphia Eagles 48-10 on Saturday night.

Tagovailoa played the entire first quarter, looking more comfortable in first-year coach Mike McDaniel's system. He finished 6 of 7 for 121 yards and a touchdown in three series.

“I think it's a credit to the practices that we've had with the Eagles and how hard our guys have been working,” Tagovailoa said. “It's really good that people can finally see the hard work that we've been putting in together.”

Hill played the opening series, finishing with two catches for 64 yards in his only action this preseason. Miami acquired the speedy receiver in an offseason trade with Kansas City and signed him to a four-year, $120 million extension.

“I was happy for those two individuals because they've invested a lot,” McDaniel said. “It was cool to see them not blink and do what they love doing.”

The Eagles sat their starters, including quarterback Jalen Hurts and receivers A.J. Brown and DeVonta Smith, instead getting an extended look at players hoping to make the team's 53-man roster.

Eagles coach Nick Sirianni said he knew from talking with McDaniel during the team’s shared practice sessions this week that the Dolphins would play more of their regulars. That didn’t change his plans for the game.

One of the planned head-to-head practices was scrapped while Miami had a number of players dealing with a stomach bug. The Eagles practiced by themselves that day.

“I felt like our guys got two good days of work in while we were here,” Sirianni said. “I thought they were ready for that week and I didn’t want to over-push them. I was comfortable with the starters. Obviously, when you play like that, it’s not acceptable no matter who’s against who. They did a nice job moving the ball and stopping us, but obviously that’s not up to our standards.”

The Eagles spent the bulk of the last two weeks away from home, with long stays in Cleveland and South Florida.

“We definitely miss home,” Hurts said. “But it’s been a good two weeks, good two weeks of grinding, work, fellowship. We’re taking steps as a football team more importantly and we’re coming together. So, it’s been a really good time. And we’re ready to go back.”

Gardner Minshew started at quarterback for Philadelphia, finishing 6 of 9 for 48 yards in two drives.

Miami scored on each of its three series with Tagovailoa taking snaps. He was sacked and threw his only incompletion on the second drive, which ended with Jason Sanders' 55-yard field goal.

After an Eagles punt, Tagovailoa directed a nine-play, 88-yard drive that Sony Michel finished with a 1-yard touchdown run to make it 17-0.

The Dolphins finished with 494 yards of offense, including 203 on the ground.

Myles Gaskin, who carried the workload for the Dolphins at running back last year, had six carries for 39 yards. He’s fighting for a roster spot on a team that brought in three running backs in the offseason: Raheem Mostert, Chase Edmonds and Michel.

Reid Sinnett, who is trying to secure the Eagles' third-string quarterback job, replaced Minshew in the second quarter and played the rest of the game, finishing 12 of 22 for 104 yards and an interception that Miami's Elijah Campbell returned 30 yards for a touchdown late in the second quarter.

Jason Huntley scored Philadelphia's only touchdown on a 67-yard run in the fourth quarter. He finished with 93 yards on 11 carries.

Teddy Bridgewater and Skylar Thompson saw action in relief of Tagovailoa. Thompson threw three touchdown passes in the second half.

Eagles: Begin their season on Sept. 11 at Detroit.