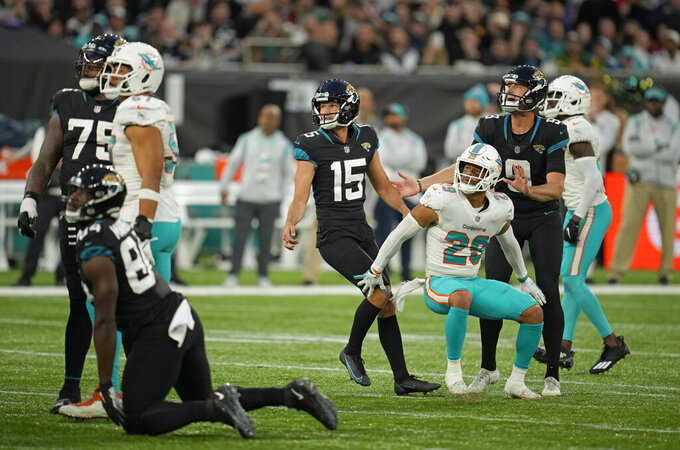 Jacksonville Jaguars kicker Matthew Wright (15), center, looks up as he kicks a field goal to win the match during the second half of an NFL football game between the Miami Dolphins and the Jacksonville Jaguars at the Tottenham Hotspur stadium in London, England, Sunday, Oct. 17, 2021. (AP Photo/Matt Dunhan)

LONDON (AP) — Tua Tagovailoa didn't expect to be the star quarterback talking about a losing streak.

The Miami Dolphins QB made his first start in a month, returning from fractured ribs though he said he's "not 100%” yet.

Still, the Dolphins were facing a Jacksonville Jaguars team on a 20-game losing streak.

Now, their transatlantic flight home from London will feel even longer after losing 23-20 on Matthew Wright’s 53-yard field goal as time expired. It was Miami's fifth consecutive loss.

“To me, it doesn’t matter how I performed today. We lost,” Tagovailoa said. “It’s tough to kind of critique how I performed or how any of our guys performed. It’s tough in the locker room right now. Take a look at that when we get back to Florida."

Tagovailoa finished 33 of 47 for 329 yards with two touchdown passes to Jaylen Waddle. He also had a bad interception late in the third quarter one play after Trevor Lawrence fumbled on a hit from defensive end Christian Wilkins.

The Dolphins haven’t won since beating New England in the season opener, back when Miami was considered a possible playoff team after a 10-6 season in 2020.

Tagovailoa spent three weeks on injured reserve with fractured ribs stemming from a hit early in Week 2 against the Buffalo Bills.

The former Alabama QB wasn't sacked on Sunday at Tottenham Hotspur Stadium, though he did scramble several times to avoid pressure.

“I’m not 100% but I was 100% ready to be out there,” Tagovailoa said. “That’s all I can tell you. I would have never put myself in the position to go out and play if I knew I would be in a position where I would hurt myself.”

The Dolphins' offense started hot, scoring on their first drive but squandered two other chances from inside the Jacksonville 10, settling for field goals both times.

“The receivers got open. Made some plays. We’ve just got to finish drives,” Tagovailoa said.

Tagovailoa completed eight of 10 passes and finished a 75-yard opening drive with a 6-yard slant to Waddle to put Miami ahead 7-0.

But they missed a chance to turn their season around. To boot, they don’t get a bye week and face an Atlanta team that did after its own London trip a week ago.

“I thought he played well,” Dolphins coach Brian Flores said of his quarterback. “Very good throws, stepped up in the pocket.”

However, Tagovailoa underthrew Waddle on cornerback Nevin Lawson's interception at the sideline at midfield.

The Jags then drove the ball to the Miami 9, but failed to convert a fourth-and-1.

Lawrence was 25 of 41 for 319 yards and a touchdown as he and coach Urban Meyer finally earned their first NFL victories.

The game featured a rematch of quarterbacks from the College Football Playoff national championship game from the 2018 season. Lawrence and Clemson beat Tagovailoa and Alabama 44-16.

“I talked to Tua right after the game,” Lawrence said. "He actually came up and found me. That’s a guy I’ve just always respected and appreciated and admired from afar. He just came up and said ‘congrats and good luck, and it’s really hard to win, so congrats.’”