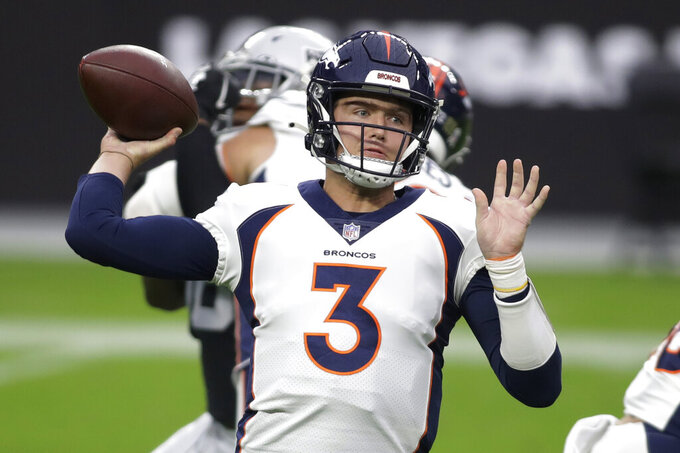 Denver Broncos quarterback Drew Lock (3) looks to throw against the Las Vegas Raiders during the first half of an NFL football game, Sunday, Nov. 15, 2020, in Las Vegas. (AP Photo/Isaac Brekken)

Miami’s rookie QB is averaging just 172 yards passing in his three starts and has thrown five touchdown passes. Over a full season, that would equate to approximately 2,750 yards and 26 TDs, or about what Patrick Mahomes has already piled up this season.

Yet, here are the numbers that really stand out for the ex-Alabama lefty: zero interceptions, no losses.

“He’s got a really quick release. He’s accurate. Obviously, he’s got the athletic ability,” said Vic Fangio, whose reeling Broncos (3-6) host Tagovailoa’s surging Dolphins (6-3) on Sunday. “He can be a scrambler and elusive in the pocket. But I think the biggest thing is that he’s running their offense very, very efficiently.”

Tagovailoa is one of only two quarterbacks in the Super Bowl era to win his first three career starts without throwing an interception. The other was Philadelphia’s Carson Wentz.

“It’s hard to coach accuracy,” Dolphins offensive coordinator Chan Gailey said. “I can’t get a guy more accurate than he is.”

Tagovailoa’s touchdown/interception ratio of 5-0 is nothing new to those who followed his Crimson Tide career. His ratio in three seasons at Alabama was 87/11.

“You always want to end the drives in a kick,” Tagovailoa said. “Even if that means a punt.”

The Broncos have had way too many drives end with the ball in opponents’ hands.

They lead the league with 21 giveaways, including an NFL-high 16 interceptions, four of which came last week in a 37-12 rout by the Raiders, who forced five turnovers altogether.

Miami ranks fourth in the league with 15 takeaways.

“This will be a very important week for us to take care of the ball,” Fangio said.

Other subplots Sunday include Tagovailoa seeking to join Ben Roethlisberger as the only rookie quarterbacks in the last 40 years to win their first four starts.

Broncos QB Drew Lock and his backup Brett Rypien shared snaps at practice during the week as Lock worked his way back from bruised ribs and a strained oblique he sustained on a blindside hit by Raiders pass rusher Arden Key last week.

The blitz-happy Dolphins rank second in the NFL in takeaways per game at 1.7. Ten players have sacks, which has kept opponents guessing.

“I would say we were probably pretty confused out there with the looks that they were giving us,” Chargers receiver Keenan Allen said last week. “They kind of messed with our play calling a little bit.”

The Dolphins, who are embarking on a three-week stretch against teams that are a combined 5-21-1, sometimes bunch seven players along the line of scrimmage, and they’ll then rush the passer in any combination.

“We work on that every day at practice,” Miami sacks leader Emmanuel Ogbah said, “and until it gets stopped, we’re going to keep doing it.”

Some of it has to do with the Broncos’ offensive miscues giving opponents a short field, but Denver’s normally solid defense has slipped over the last month. The Broncos have allowed at least 30 points in four straight games for the first time since 1968, and 37 of those 144 points they’ve given up in that span have come off turnovers.

Exacerbating Denver’s defensive woes are the absences of coordinator Ed Donatell and end Shelby Harris because of COVID-19 infections. Harris will miss his third consecutive game and Donatell has been out since Oct. 31. Donatell is one of two people in the NFL known to have been hospitalized with a serious case of the novel coronavirus. The other is Jaguars RB Ryquell Armstead.

Fangio said Donatell is back home and recovering and they speak a couple of times a day, text often, "and he is looking in on some of the meetings virtually from his residence. He’s much, much better. Every day he gets better.”