Tanking? Panthers positioned for No. 1 pick after CMC trade 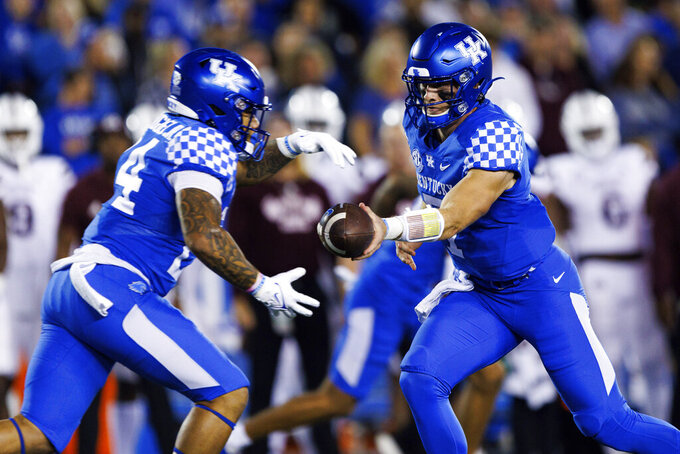 Kentucky quarterback Will Levis, right, hands the ball off to Kentucky running back Chris Rodriguez Jr. during the first half of an NCAA college football game against Mississippi State in Lexington, Ky., Saturday, Oct. 15, 2022. (AP Photo/Michael Clubb)

CHARLOTTE, N.C. (AP) — Some might say it’s a rebuild. Others might go so far as to call it tanking.

Either way, the Carolina Panthers, who've already fired a coach this season and own the NFL's worst record at 1-5, are now well positioned to get the No. 1 pick in the 2023 draft — and land the franchise quarterback they’ve coveted for years.

The Panthers’ offense was already dead last in the league — and that was before the team traded its best player, Christian McCaffrey, to the San Francisco 49ers and starting wide receiver Robbie Anderson to Arizona Cardinals.

General manager Scott Fitterer said Friday the decision to deal McCaffrey was in the best interest of the future of the organization.

He refused to call it tanking.

“The NFL is a business where you lose guys, whether it is injuries or trades or whatever happens,” Fitterer said. “The expectation of winning never changes. Those guys in the locker fight too hard and work too hard every day. We owe it to them. That's our expectation to go out and win every game.”

But how does Fitterer tell players they're expected to win when he's just traded away the team's undisputed star?

Said interim coach Steve Wilks: “There’s no such thing as tanking when it comes to myself or the men in that locker room.”

Injured quarterback Sam Darnold was bummed when he learned of the trade Friday morning, but doesn't think management is tanking, saying "we’re worried about going out there and winning football games. We’re not worried about any of the narratives going on outside of the locker room.’’

Owner David Tepper spoke last week about the delicate balance between establishing a winning culture and finding a franchise quarterback in the draft to build around.

Former NFL general manager and analyst Bill Polian doesn't think the Panthers are tanking, and he liked how Panthers pit two organizations — the 49ers and Los Angeles Rams — against each other to drive up McCaffrey's asking price.

The Buffalo Bills were also involved in talks early on.

“They picked up a nice group of picks for him, so that's a pretty good return on a running back who is obviously a great player but who has had some nicks here and there over the last couple of years,” Polian said. “From their perspective it is a good return.”

But looking ahead to next season, the problem remains finding a quarterback.

The Panthers haven’t been able to get consistent production at the game's most important position for quite a while. They signed Teddy Bridgewater, traded for Darnold and Baker Mayfield and even brought back Cam Newton for a second stint.

Still, they find themselves starting undrafted P.J. Walker — who entered training camp fourth on the depth chart — on Sunday against the Tampa Bay Buccaneers.

If the season ended today, the Panthers would have the top pick in the 2023 draft and a strong quarterback class to choose from, led by Kentucky’s Will Levis, Ohio State’s C.J. Stroud and Alabama’s Bryce Young.

Polian advised the Panthers to do plenty of research.

“I’d go slow on those guys,” Polian said of next year's QB class. “Sam Darnold and Baker Mayfield are living proof of why you should. They were anointed (before the draft). I have never believed in anointing anyone.”

The big question now is whether the Panthers will continue to rebuild — or tank — by unloading core players like defensive end Brian Burns, wide receiver D.J. Moore and defensive tackle Derrick Brown. The 24-year-old Burns is likely to command multiple first-round picks if the team decides to move him.

Fitterer said that while “philosophically, we will always listen,” it would take an “astronomical” offer to part with a core player.

“We like the young core of our team,” he said. “We’re building. This isn’t a situation where we’re trying to sell. We’re trying to add players to this really good mix. These are guys we win with moving forward.”

Time will tell if that holds true — the NFL trade deadline is Nov. 1.