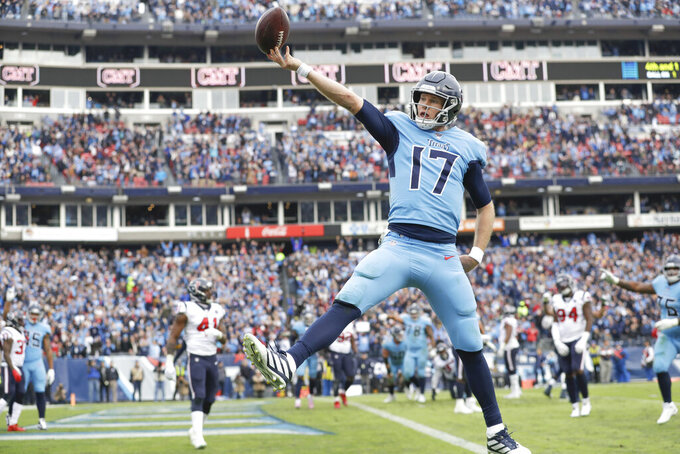 Tennessee Titans quarterback Ryan Tannehill (17) scores a touchdown on a 1-yard run against the Houston Texans in the second half of an NFL football game Sunday, Dec. 15, 2019, in Nashville, Tenn. (AP Photo/James Kenney)

NASHVILLE, Tenn. (AP) — Ryan Tannehill does not hide his emotions on the football field, celebrating big plays with a fist pump or punctuating his own touchdown run by raising the ball up into the air.

He'll even run down a defender after an interception and take him down with a perfect tackle.

Now the No. 8 pick in the 2012 draft has gone from being traded in March to preparing for his postseason debut with his second NFL team, the Tennessee Titans, after eight seasons and 100 games played.

“It's always something that I wanted to be doing my whole career,” Tannehill said Tuesday.

And his opponent Saturday night will be none other than the defending Super Bowl champion Patriots (12-4) and Tom Brady, the former sixth-round draft pick with more Super Bowl rings than any other quarterback.

“He's a guy that's been doing it for a long, long time at a very high level,” Tannehill said. “So he's won a lot of games and obviously have a lot of respect for him.”

Tannehill finally reaching the playoffs as the starting quarterback for the Tennessee Titans didn't seem possible back in March when Miami chose to pick up $5 million of his salary and dump him off on the Titans all while eating $18.4 million of his salary cap hit. His role in Tennessee? A backup only to Marcus Mariota, the Titans' first-round draft pick in 2015.

Mired in a 2-4 start, the Titans benched Mariota in mid-October and turned to the 6-foot-4, 217-pound former wide receiver. He responded, going 7-3 as a starter to help the Titans (9-7) to their second playoff berth in three seasons with the AFC's second wild card.

Tannehill led the NFL with a career-best 117.5 passer rating that is the fourth-highest in a single season among qualified passers in league history. He joined Sammy Baugh and Joe Montana as the only quarterbacks to complete at least 70% of passes (70.3%) and average at least 9 yards per pass attempt (9.6).

He's thrown for 2,742 yards with 22 touchdowns and only six interceptions while running for a career-high four TDs. He's a big reason why the Titans rank 12th in the NFL in total offense and 10th in points per game after being 28th in scoring an average of 16.3 points a game when Tannehill became the starter.

Oakland coach Jon Gruden said in early December that greatness can't be rushed and the key is how players respond to being cut or released or someone being fired.

“He’s obviously athletic and got a really good group of receivers,” Belichick said. “I mean, the offense works well together with their strong running game and play-action passes, and he’s hit them. He’s made good decisions with the ball. Really impressive offense and their system, very impressive.”

He is 4-7 against New England and beat the Patriots in just his second season in the NFL in 2013. After that, the Patriots reeled off 21 straight victories against first- or second-year quarterbacks until Lamar Jackson ended that streak Nov. 3.

In Foxborough, Tannehill is 0-6 with only five TDs and 10 interceptions. And Brady remains the quarterback on the other side looking to win his seventh Super Bowl. Brady has the most postseason experience in league history with 40 games, and he also holds the marks for most passes thrown and completed, yards and TD passes.

While waiting for this opportunity, Tannehill always knew what he wanted.

“It's the thought I want to be playing in January and playing for a championship,” Tannehill said.