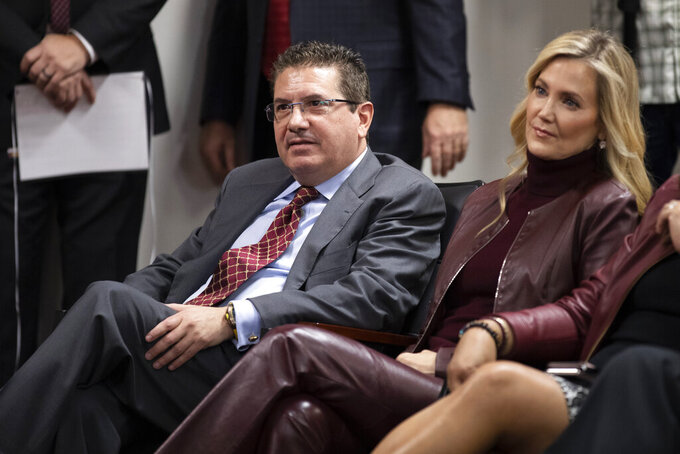 FILE - Washington Redskins owner Dan Snyder, left, and his wife Tanya Snyder, listen to head coach Ron Rivera during a news conference at the team's NFL football training facility in Ashburn, Va., in this Thursday, Jan. 2, 2020, file photo. Dan Snyder’s wife Tanya was named co-CEO of the Washington Football Team on Tuesday, June 29, 2021, giving her bigger influence in the club that is currently in the midst of an independent investigation into workplace conduct the NFL is overseeing. (AP Photo/Alex Brandon, File)

ASHBURN, Va. (AP) — Dan Snyder’s wife Tanya was named co-CEO of the Washington Football Team on Tuesday, giving her bigger influence in the club that is currently in the midst of an independent investigation into workplace conduct the NFL is overseeing.

Tanya Snyder had been in charge of the organization’s philanthropic efforts since the Snyders took ownership of the team in 1999.

“Tanya is one of the most important figures in this organization, and that has only become more true over the last 18 months as her involvement has deepened,” Dan Snyder said.

“Behind the scenes, she has had a profound impact on the direction of the Washington Football Team. She was instrumental in our decision to evolve the brand and modernize our fan experience."

The team hired lawyer Beth Wilkinson last summer to look into allegations of sexual harassment and other improper conduct within the organization. The league took over that investigation, which has not yet been completed.

Promoting Tanya Snyder is the latest move to improve the culture with Washington after Ron Rivera took over as coach and Jason Wright was named team president.

“We are at a pivotal point in the history of this team as we work to become the gold standard of NFL franchises,” she said. “The co-CEO titles reflect our approach to that effort. It is a natural progression, but it’s important to formally recognize the diversity of opinion and perspective that informs everything we do.”

Beyond Tanya's charitable efforts, Dan said "her role has outgrown such informal titles like his closest confidant.

“The perspective she brings to this organization is invaluable,” he said. "I am incredibly proud to recognize it with a fitting title: CEO.”