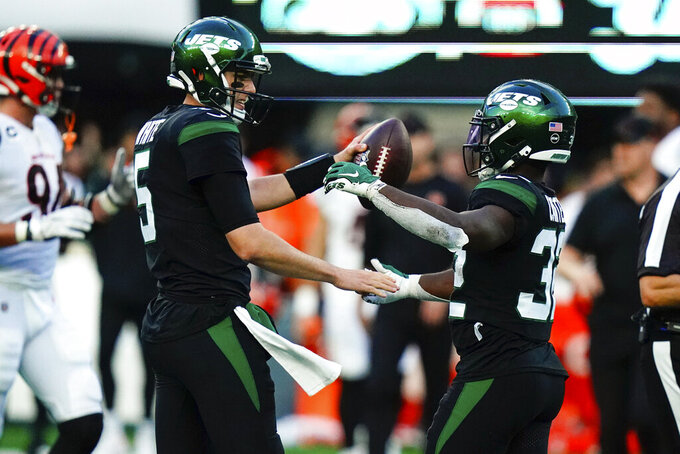 The second-year running back embraces the heavy workload, enjoys working with his supporting cast and doesn't worry about how many times he's asked to deliver. He just wants to succeed.

So four days after a physically draining game Taylor will step onto Thursday night's stage and hopes to show the football world what he can do against the New York Jets.

“I’m excited because I love playing at home and Lucas Oil Stadium is going to be rocking for a prime-time game at home," he said. “That’s going to be exciting — really, really exciting.”

Team owner Jim Irsay and Taylor's teammates think it's an appearance that is long overdue. Indy last hosted a prime-time game on Dec. 14, 2017, a span of more than 1,400 days.

Only two of Thursday's projected starters were around for that game: tight end Jack Doyle and cornerback Kenny Moore II. Punter Rigoberto Sanchez, long snapper Luke Rhodes and receiver T.Y. Hilton also played in that game, but Hilton will sit out this one because of a concussion.

For most of the other Colts players, including Taylor, this will be a new experience.

“We’re in the market we’re in," said linebacker Darius Leonard, a two-time All-Pro in his first three seasons. . “Sometimes you’ve got to bite the bullet and play prime-time games like we did in Baltimore or San Francisco. Hopefully you win those games, get some respect and maybe you’ll get it back."

The Jets haven't been big prime-time players lately, but have a chance to rewrite the script after pulling surprise October wins over Tennessee and Cincinnati.

Mike White delivered a show-stopping performance last week by going 37 of 45 for 405 yards and three touchdown passes, setting an NFL record for completions in a first start. He also became the first player in league history to to top 300 yards with a completion percentage of at least 75% in a starting debut.

And now it's not just the Jets who want to see what White will do for an encore.

“The really cool thing about it is that there was no Herculean effort from Mike,” New York general manager Joe Douglas said. “It was just taking what the defense gave him, executing the offense effectively and efficiently, and making the most of his opportunity — making great decisions, throwing accurate passes. I’m so happy for Mike because this is what football is all about."

The key, though, will be getting the Jets' defense to do its part and slow down Taylor, who has 100 yards from scrimmage and a touchdown in five straight games — the two longest active streaks in the NFL.

Taylor has his own plan.

The Jets might have their version of Taylor in rookie running back Michael Carter.

On Sunday against the Bengals, Carter had 172 yards from scrimmage, the third-highest total by a Jets rookie since 1970. He had 15 carries for 77 yards with one score and caught nine passes for 95 yards. Despite using a three-man backfield committee this season, Carter's versatility has helped emerge as a potential feature back.

“He’s a rookie, but he’s proven he’s built for this, and he's a vet in a rookie body,” running back Ty Johnson said.

Indy likes the offseason investment it made in quarterback Carson Wentz.

Sorting out the battle behind Wentz has been a challenge. Second-year quarterback Jacob Eason replaced Wentz and threw an interception in the final minutes of a loss to the Los Angeles Rams, then was dropped to No. 3 on the depth chart behind veteran Brett Hundley.

Slow starts sabotaged the Jets through the first six weeks. Last week, they finally broke through with a touchdown on their opening drive — their first first-quarter points all season.

“I think the decision to cut it loose early kind of caught them off guard,” White said. “We were able to execute the offense from then on.”