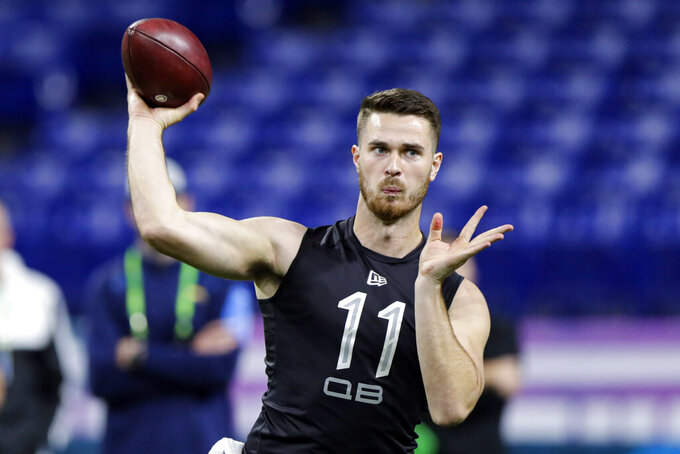 The theory that NFL teams would go with three quarterbacks to start the pandemic-impacted season took a hit Saturday.

Lots of third-stringers were sent packing as the 32 teams got down to the 53-man limit. The season opens Thursday night with Houston at Super Bowl champion Kansas City.

Perhaps most noteworthy was Miami releasing Josh Rosen, a first-round selection by Arizona in 2018 who was dealt to the Dolphins last year after the Cardinals took Kyler Murray with the top overall selection. Rosen was behind veteran Ryan Fitzpatrick and first-rounder Tua Tagovailoa on the depth chart.

"The most important thing is to kind of move forward and not look back,” Dolphins coach Brian Flores said. “You don’t hit on every play, on every trade, on every draft pick. Show me a team that has hit on every one. I’ll applaud that team.”

Miami also traded for versatile rookie Lynn Bowden Jr. It also got a sixth-round draft pick from the Raiders for a fourth-round choice. Bowden can play running back or receiver, and also played quarterback at Kentucky.

Alex Smith made Washington’s 53-man roster, another significant step in his remarkable comeback 22 months since severely breaking his right leg and then having medical complications. Coach Ron Rivera said there’s no plan to put Smith on injured reserve in the coming days. Smith might even be Dwayne Haskins’ backup in the season opener Sept. 13 against the Philadelphia Eagles.

Another heartwarming story: Star-crossed tight end Jake Butt made the Broncos after overcoming his sixth knee operation. In three seasons in Denver, the ex-Michigan star has played in as many games (three) as he’s had major knee surgeries, each of which required a clean-up procedure.

“If you’ve been through an ACL you know how hard one is. When you go through three, it means a lot to get that recognition from your comrades, your teachers, your coaches,” Butt said recently. “But for me, I’m healthy. It’s part of my story but I’m out there, I’m out there playing ball, I’m not looking back.”

Other quarterbacks released were veteran Mike Glennon and Josh Dobbs of the Jaguars, David Blough of the Lions, who lost all five of his starts subbing for the injured Matthew Stafford in 2019; Paxton Lynch of the Steelers; Cooper Rush and Alex Tanney of the Giants; Kurt Benkert and Kyle Lauletta of the Falcons; Chad Kelly of the Colts; and David Fales and Mike White of the Jets, who said veteran Joe Flacco passed his physical after neck surgery.

Making the Giants was Mr. Irrelevant. Georgia linebacker Tae Crowder, the final player taken in April's draft, is on the roster. Miami kept Malcolm Perry, a star QB at Navy and now a wideout.

One NFL star quarterback got much richer. The Texans and Deshaun Watson reached agreement on a four-year, $160 million contract that ranks only behind the 10-year, $503 million deal for Kansas City's Patrick Mahomes. Coincidentally, those two will face off in the season opener on Thursday night.

“As a child growing up in Georgia, it was always my dream to play in the NFL,” Watson wrote on social media. “Today, I couldn’t be more honored and humbled to sign a long-term deal in Houston, the city that I’ve grown to love so much and now call my home.”

“I promise to do everything I can to not only bring a championship to this great city but also leave a legacy of helping positively impact this community,” he wrote in the post. “Now back to the work ...”

The Chargers' Keenan Allen received a four-year deal that will make him the league’s second-highest paid receiver in average money. He will get $80.1 million with $50 million guaranteed.

“Want to thank the organization ... (general manager) Tom Telesco especially for giving me a opportunity! Super juiced about this,” Allen said on his Instagram account.

Pittsburgh cut longtime defensive tackle Dan McCullers. A sixth-round pick in 2014, the massive McCullers (6-foot-7, 352 pounds), carved out a niche as a backup but struggled to get into the regular defensive line rotation.

The Cowboys released two veterans who played all 16 games last season, linebacker Justin March and cornerback C.J. Goodwin. March and Goodwin mostly played on special teams but saw some action on defense because of injuries.

It’s not certain Samuel will be able to play in the opener. Samuel caught 57 passes for 802 yards and three TDs last season and also made big contributions in the running game. He had 14 carries for 159 yards and three scores. Samuel was a standout in the postseason, too.