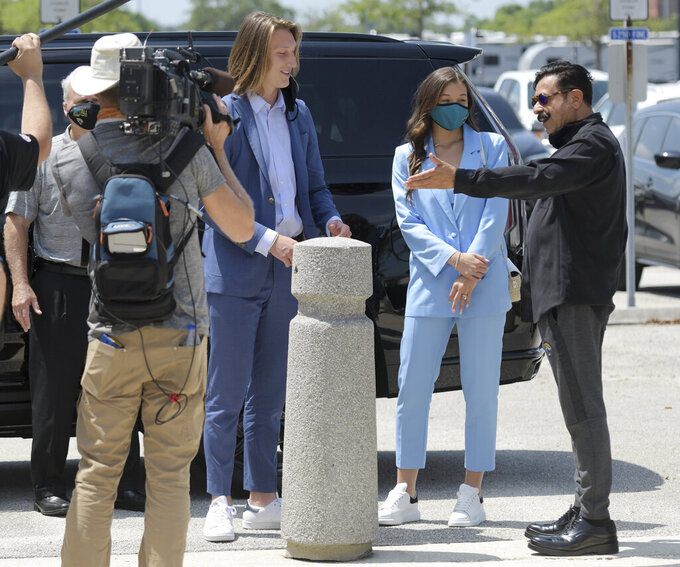 “I said, ‘How do we get him?’” Meyer recalled. “Trent looked at me like I had five heads.”

The Jaguars waited nearly two days – 141 picks, to be precise – to finally address the tight end position. They chose Ohio State’s Luke Farrell with the first choice in the fifth round Saturday. But he’s an unlikely answer to the team’s most glaring hole, leaving the Jaguars in the market to make a move for a pass-catching tight end.

No one would be surprised to see 33-year-old Tim Tebow end up signing with his hometown team. Tebow retired from professional baseball in February and worked out for the Jaguars a week later – as a tight end.

Tebow, who remains a college football analyst for the SEC Network, played quarterback for Meyer at nearby Florida -- where he won two national championships and the 2007 Heisman Trophy -- and was a first-round draft pick by Denver in 2010. He spent time with the Broncos, the New York Jets, New England and Philadelphia.

Tebow won a playoff game with Denver in 2012, but never developed into a consistent NFL starter. He declined several suggested moves to tight end — he even asked Meyer for guidance — and then ended up switching sports and playing five years with the New York Mets' organization.

“When he was a quarterback in the NFL, that was a big topic," Meyer said. "I was so busy I couldn’t give him the time. ‘What do you think? What do you think?’ And I didn’t know. I was too busy to even think it through.

“I know playing a position in the NFL without (experience), that’s a long shot. This was years ago.”

How did Tebow get the workout?

“We had conversation,” Meyer said. "He worked out with our tight end coach. I stopped by, did not stay for the whole workout. … We’re going to revisit it here in the near future.”

“Yeah, we’re still looking around,” Meyer said. “There’s some conversations going on right now about how to try to find a tight end.”

The Jaguars parted with veteran Tyler Eifert and oft-injured 2019 draft pick Josh Oliver in the offseason. They signed run-blocking specialist Chris Manhertz in free agency and brought back James O’Shaughnessy.

The 6-foot-6, 255-pound Farrell joins them after catching 34 passes for 380 yards and four touchdowns at Ohio State. He might soon be joined by Tebow.

“Would not mind having that guy in my room,” Farrell said.

Meyer said during a TV interview that one player “broke his heart” by getting picked before Jacksonville chose Clemson running back Travis Etienne at No. 25 in the first round. He hesitantly admitted Saturday that the player was Florida receiver Kadarius Toney. The New York Giants selected Toney with the 20th pick.

Jordan Smith’s road to the NFL was a winding one. The 6-foot-7, 264-pound edge rusher and a fourth-round draft pick started his college career at nearby Florida but was dismissed after getting caught up in a credit card scandal that involved several teammates. He ended up at Butler Community College in Kansas and then transferred to UAB, where he had 14½ sacks and 27 tackles for loss in two seasons.

“I had a pretty good bounce back from my situation at Florida,” Smith said, adding that he felt he was the best pass rusher in the draft.

Jacksonville traded up nine spots in the fourth round to take Smith with the 121st overall selection.

USC defensive tackle Jay Tufele opted out of the 2020 season for good reason. Tufele had several family members contract COVID-19, including his older sister Noreen. She was hospitalized in intensive care, and doctors were worried she might not recover. She did and was on hand to witness her brother being the first pick on the final day of the draft, No. 106 overall.

“Today is the most special day in my life,” he said. “Just the whole life changing, it’s everything. From being a little kid and then especially with everything that’s happened, it’s just a blessing.”