Texans can clinch AFC South with win on Saturday 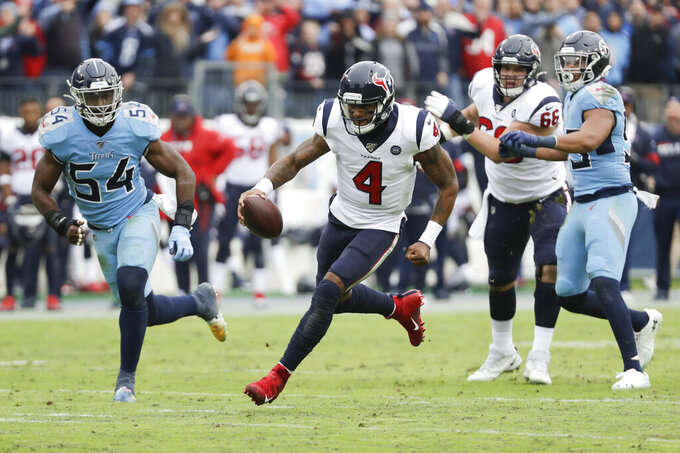 Houston Texans quarterback Deshaun Watson (4) scrambles against the Tennessee Titans in the second half of an NFL football game Sunday, Dec. 15, 2019, in Nashville, Tenn. The Texans won 24-21. (AP Photo/James Kenney)

HOUSTON (AP) — The Houston Texans beat the Tennessee Titans on Sunday to retain control of the AFC South and bounce back after an embarrassing loss to Denver.

Now they're looking to build on that win on Saturday when they travel to Tampa Bay where a win would give them their fourth division title in six years.

Quarterback Deshaun Watson said he never doubted that the Texans would be able to shake off their bad performance against the Broncos and get back on track against the Titans.

“You deal with the adversity. That's part of the NFL,” Watson said. “Not everything goes your way throughout the week, during games, throughout practice, everything. You’ve got to be able to turn the page, live in the next moment, take care of the next moment and focus on the next task at hand.”

While coach Bill O'Brien understands that people are focused on Houston's chance to win the division on Saturday, he's far more concerned about the challenge Tampa Bay presents.

The Texans got the 24-21 win over the Titans thanks in part to a big play by their defense. The Titans had first-and-goal at the Houston 5 late in the first quarter when Justin Reid knocked the ball out after a reception by Anthony Firkser and Whitney Mercilus grabbed it for an interception he returned 86 yards.

“It was a good play,” O'Brien said. “It got the ball down there in the red area. It was a big play because they were going in to score. It was a very opportunistic play.”

Houston had a great day on special teams against Tennessee. Angelo Blackson blocked a 45-yard field-goal attempt in the first quarter and Lonnie Johnson knocked down a pass that would have given the Titans a first down on a fake punt in the second quarter.

Watson had two interceptions for the second straight game after throwing just two in the previous five games combined. He'll need to limit his turnovers as the Texans look to secure their playoff berth on Saturday.

Wide receiver Kenny Stills had two touchdown receptions on Sunday for his first multi-touchdown game this season. Stills, who is in his first year in Houston after a trade from Miami, has 504 yards receiving with four TDs this year.

Left tackle Laremy Tunsil, who leads the NFL with 12 false start penalties, didn't have one on Sunday, but had a holding penalty that contributed to one of Houston's drives stalling in the first quarter.

98 — DeAndre Hopkins had four catches for 98 yards in the fourth quarter on Sunday to help Houston secure the victory.

O'Brien knows his team has some things to clean up if it hopes to beat the Buccaneers, but he is confident that the Texans will be ready to perform despite the short week.

“Our guys will come in focused,” he said. "It’s just a lot of fun when you’re playing these games at the end of the year with a lot on the line. I think that’s what it’s all about."

By David Brandt just now
By Teresa M. Walker 6 minutes ago
By Josh Dubow 4 hrs ago
By Tom Withers 11 hrs ago
By Dennis Waszak Jr. 11 hrs ago