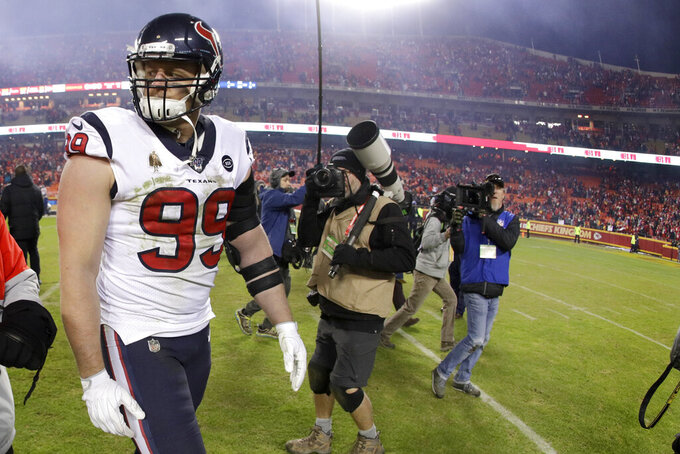 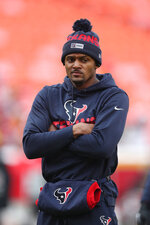 HOUSTON (AP) — The Houston Texans were up 24-0 in the first quarter against the Kansas City Chiefs and looked to be headed for their first AFC championship game, which they would have hosted.

Then everything fell apart.

And now instead of preparing for another playoff game, the Texans are left to wonder what might have been after allowing Kansas City to orchestrate the biggest comeback in franchise history in a 51-31 win.

“We feel like we have a really good culture here, we’ve got a good group of core players here,” coach Bill O'Brien said. “We're working hard to make the next step to get to where everybody wants us to get to, and where we want to get to. It just didn't go that way (Sunday) ... (but) we're going to work very, very hard to get back to that game where we were yesterday and then obviously try to do better.”

O'Brien faced plenty of criticism for decisions he made in Sunday's collapse and some local columnists called for him to quit or be fired. His most questioned move on Sunday came when Houston led 24-7 and instead of punting, O'Brien called for a fake and Justin Reid was stopped shy of a first down to give Kansas City a short field.

The Chiefs scored another touchdown soon after that en route to scoring 41 consecutive points to take over the game and roll to their second straight AFC title game.

O'Brien was also questioned for another move he made earlier in the game. Houston faced fourth-and-1 at the 13 early in the second quarter, but instead of going for it he settled for a 31-yard field goal that made it 24-0.

Quarterback Deshaun Watson was not happy with the criticism of O'Brien and defended his coach when asked if he's the right man to lead the Texans.

“You might have doubt, but I don’t,” Watson said. "I love that man, and I’ll always play hard for that man. You all can say what you want to say in the media, but as long as I’m at quarterback, he’s cool with me. He’s got my heart.''

While many players were understandably upset after Sunday's collapse, Watson remained upbeat and positive about the direction of the team.

“The future is bright for this organization ... there is no way that I’ll be discouraged for the future, it’s all positive," he said. “'We did so much this season. We went through so many ups and downs. For us to be one of the final eight teams is huge. There’s a lot of teams at home that wish they were in a position to play this game ... it just didn’t go our way.''

Watson, who threw for 388 yards and two touchdowns and ran for another score, is confident that he will be able to lead Houston to more success in the future.

“As long as I’m a part of this organization, we’re going to be in games like this,'' he said. ”We’re just going to keep pushing forward and keep moving.”

The Texans enter the offseason with 18 unrestricted free agents, including several starters. Perhaps the most important of these players is nose tackle D.J. Reader, who had the best season of his career. Reader, who was a fifth-round pick in 2016, has developed into one of Houston's most consistent defenders and the Texans could use the franchise tag on him.

Houston also has two running backs that will be free agents in Lamar Miller and Carlos Hyde. Miller was the team's featured back for three seasons before tearing knee ligaments in August and missing the season. Hyde was traded from Kansas City soon after Miller was injured and had a career-high 1,070 yards rushing. Tight end Darren Fells is also a free agent after having a strong year where he set career bests in yards receiving (341) and touchdowns (seven).

It's clear that Watson is the franchise quarterback the Texans have long searched for and that he's capable of helping them take the next step. But for that to happen Houston's defense will need to be much better. After the first quarter on Sunday, the unit was no match for Patrick Mahomes and Kansas City's powerful offense.

Getting star defensive end J.J. Watt back for the playoffs was a boost to the group, but to get to the next level the Texans will need a much better pass rush and shore up a secondary that ranked among the worst in the NFL.

Since O'Brien is the team's coach and also served as its general manager this season after the firing of Brian Gaine, the pressure is on him to improve in both aspects to help Houston move forward.