Texans fall apart after 3 quarters in tie with Colts 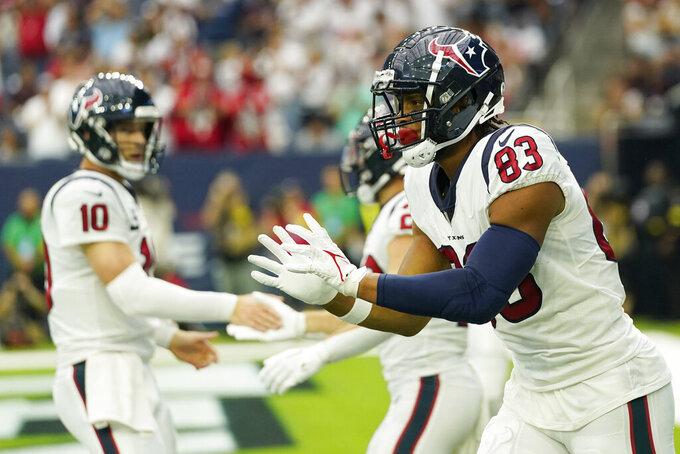 HOUSTON (AP) — The Houston Texans put together a great three quarters Sunday to build a big lead before falling apart late and settling for a 20-20 tie with the Indianapolis Colts.

Despite the collapse, the Texans are encouraged by their performance and believe they’ll be able to build on the many good things they did in the opener as they try to improve on last year’s 4-13 season.

“It’s a different team,” receiver Brandin Cooks said. “The work that we’ve been putting in over the summer and the spring has showed up. But obviously, there’s some more to go. We’re going to keep pushing, keep knocking at that door, and keep getting better every single week. I love what we’ve got, no doubt.”

Houston led by 17 after three quarters, but couldn’t do anything after that. They got the ball first in overtime, but had to punt and had a second chance in OT after the Colts missed a field goal.

On that drive, the Texans faced fourth-and-3 from the Indianapolis 49 and coach Lovie Smith chose to punt instead of going for it with 26 seconds left in the extra period.

Smith, who is in his first season as the team’s head coach after David Culley was fired after one season where the team went 4-13, defended his decision not to go for the win.

“It’s not like we were playing our best defense at the time,” Smith said. “We were drained ... that’s how it goes. In an ideal world, you don’t want a loss, you want a win, but if you can’t get the win, sometimes you settle for the tie.”

It was the first tie in franchise history.

Quarterback Davis Mills threw for 240 yards and two touchdowns before losing a fumble late as he continues to develop in his second NFL season.

“We didn’t finish the way we need to. Davis is a part of that,” Smith said. “Looking at it on the other hand, for us to be able to get that lead, Davis had to do some good things. So, we’re going to build on those good things, going to learn an awful lot from this game, but we’ll recover.”

Houston’s defense looked much improved from the group that ranked 31st in the NFL last season.

Defensive end Jerry Hughes had two sacks and an interception in his debut with the Texans after spending the past nine seasons with the Bills.

Rookie Derek Stingley, the third overall pick in this year’s draft, started and played well. He finished with seven tackles and knocked down a pass in the end zone in the fourth quarter.

If you focus on the first three quarters, there is plenty that is working on this team. The defense was swarming to the ball, forcing turnovers and making big stops.

Mills was decisive and consistent and looked as if he’d taken a step forward from a subpar rookie season. Cooks continues to be a leader on the offense and had seven receptions for 82 yards.

Linebacker Kamu Grugier-Hill picked up where he left off last season when he led the team with a career-high 106 tackles by getting 18 tackles and defending a pass in the opener.

The running game couldn’t do much despite the addition of rookie Dameon Pierce. They managed a paltry 77 yards rushing after ranking last in the NFL in 2021 by averaging 83.6 yards a game.

Tight end O.J. Howard, who was a late addition to the team after signing on Sept. 2, caught TD passes on his only two catches Sunday to help Houston build the lead.

Pierce had a lot of hype entering the opener after the fourth-round pick used a great camp to earn the starting job. But he managed just 33 yards on 11 carries Sunday, showing he might need some time to adjust to the NFL.

No injuries were reported this week.

2 — Number of touchdowns Houston’s defense limited the Colts to on five trips inside the red zone, highlighted by Jonathan Greenard dropping Nyheim Hines for a 2-yard loss on fourth-and-2 from the 2 in the second quarter.

The Texans will need to learn how to finish and get their running game going if they hope to beat Russell Wilson and Broncos on Sunday in Denver.