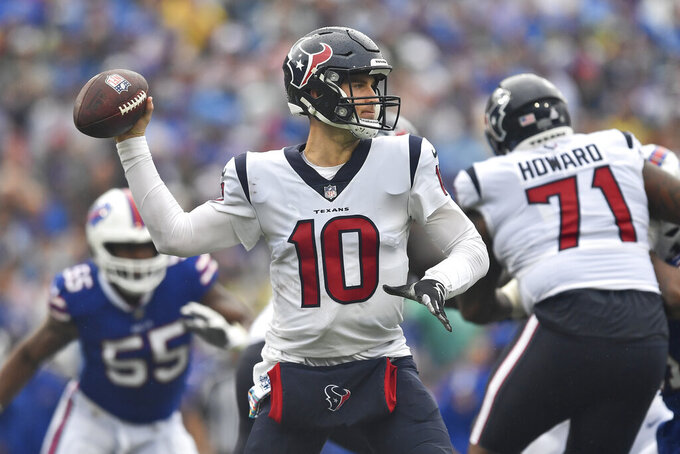 Houston Texans quarterback Davis Mills (10) looks to throw during the first half of an NFL football game against the Buffalo Bills, Sunday, Oct. 3, 2021, in Orchard Park, N.Y. (AP Photo/Adrian Kraus)

HOUSTON (AP) — Those watching rookie Davis Mills bungle his way through Houston’s embarrassing loss to Buffalo on Sunday had to be asking one of two questions.

1. Is Tyrod Taylor coming back soon?

2. Is there anyone — literally anyone else — who can play quarterback for the Texans?

The performance by Mills in the 40-0 loss was perhaps the worst quarterback performance in the history of the franchise.

And that’s saying something for a team whose short existence has been plagued by quarterback woes.

Remember Brock Osweiler and Ryan Mallett? And, of course, there was David Carr, the No. 1 draft pick, who spent their inaugural season in 2002 running for his life when he was sacked an NFL-record 76 times.

Mills wasn’t good in a 24-9 loss to Carolina Sept. 23 in his first career start, but at least he took care of the ball and got the team in the end zone.

On Sunday he did neither of those things, tying a franchise record by throwing four interceptions and finishing with just 87 yards passing as Houston suffered its most lopsided loss ever.

The third-round pick from Stanford finished the first half with two interceptions and just one completion as Houston’s offense limped into halftime after gaining just 8 yards.

Mills finished with a passer rating of 23.4, which was the worst of any starter in a game this season.

It was the first time a Texans quarterback had thrown four interceptions since 2008 when Sage Rosenfels was picked off four times in a rout by the Ravens while filling in for an injured Matt Schaub.

Now to answer those earlier questions.

Taylor must sit out one more game after being placed on injured reserve Sept. 21 with a hamstring injury. It’s unclear if he'll need more time than that.

“Hopefully we get him back here in the next couple of weeks,” Culley said.

The answer to question No. 2 is also not good news for those hoping to see someone else under center Sunday when the Texans host New England.

Culley said after the game that he did not consider benching Mills for Jeff Driskel, who’s serving as his backup while Taylor is out. On Monday, Culley said that they are not considering signing another quarterback “at this time.”

So, it looks as if Mills will be the guy at least for one more week. Now the Texans must find a way to help him put this game behind him and improve this week.

Culley said he isn’t concerned that Mills will bounce back after such a tough game.

“It wasn’t a good day,” Culley said. “He knew it wasn’t a good day. He also understands as our quarterback the first thing you’ve got to be able to do is ... protect the football. He didn’t do that (Sunday). He’s just got to get better there and understand that that’s part of the growing pains.”

When a team allows 40 points and doesn’t score it’s hard to say anything is working.

While quarterback play is the team’s biggest problem, there are plenty other things to fix on this team which has dropped three games in a row. Mistakes were everywhere in Sunday’s loss and the Texans had 10 penalties for 100 yards.

Problems like that come back to the coaching staff, Culley said.

“When your football team plays the way we played (Sunday), they’re not ready to play,” he said. “I’ll take the blame. I am the blame for that. Our coaching staff is the blame for that. Because we haven’t played that way to that point. We had played good football ... to be able to have a chance to win football games, we didn’t do that (Sunday).”

Again, hard to hand out any accolades after a performance such as this one.

The easy answer here would be to pile on Mills, but let’s move to the running game and say Mark Ingram. The running back had 85 yards rushing in the opener, but has combined for just 86 yards in the three games since as the Texans have struggled to run the ball.

RB Rex Burkhead has a hip injury that could keep him out Sunday. ... Culley said DL Jonathan Greenard was OK after leaving the game with a chest injury in the third quarter.

Culley and Houston’s staff must find a way to get Mills more comfortable to get the offense going for the Texans to have a chance against the Patriots. Culley is confident the problems and fixable and believes his Texans will play much better Sunday if they can eliminate the turnovers and penalties that plagued them against the Bills.