Texans get big win, face test with Patriots up next 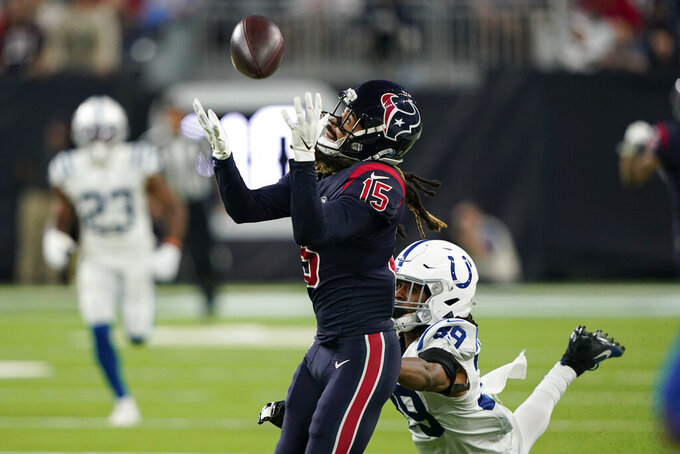 HOUSTON (AP) — Deshaun Watson and the Houston Texans got back on track with a win over the Colts on Thursday night to take over the AFC South lead.

Now they'll have extra time to prepare for their next test with a visit from the Patriots on Dec. 1.

Houston improved to 7-4 with the 20-17 victory over Indianapolis that came after a 41-7 loss to the Ravens last Sunday. The Patriots are 9-1 entering Sunday's game against the Cowboys.

Watson leaned heavily on star receiver DeAndre Hopkins to lead Houston to Thursday night's win. Watson, who had two turnovers against Baltimore, threw for 298 yards and Hopkins caught both of his touchdown passes and had 94 yards receiving.

Coach Bill O'Brien talked about the value of having a veteran like Hopkins on a team with a young quarterback.

"You have a guy who's been doing it for a long time," O'Brien said. "You look at DeAndre Hopkins' stats in his career, they're incredible. His ability ... (as) a guy that we go to on third down or first and second down to move the chains, and that's great for a quarterback, and everybody knows he's got awesome hands."

Watson, who threw multiple touchdown passes for the sixth time this season, raved about the performance of Hopkins against the Colts.

"He did a (great) job to come down with those two touchdowns," Watson said. "You got to give him that credit. He basically checked to those plays and I was on the same page with him and we came down with the touchdowns.”

Houston's offense got a boost on Thursday night with the return of receiver Will Fuller, who missed the previous three games with a hamstring injury. Fuller had 140 yards receiving, which was the second-most in his career and his eighth career 100-yard game.

"He's just a really dynamic receiver," O'Brien said. "He's got really good speed and he's a great route runner. The deal with Will, and Will knows this ... it's always health. Just being healthy and being able to be out there, Will is going to make plays because he can run, he's improved his hands over the years."

Fuller, who has 590 yards receiving this season, has missed 20 games in four NFL seasons because of injuries.

Houston's secondary had a strong game against Indianapolis despite missing several players because of injuries. The Texans allowed a season-low 129 yards passing on Thursday night and will need to build on that effort with Tom Brady coming up next.

Houston’s 99 yards rushing on Thursday night were its second-fewest of the season. Carlos Hyde, who piled up a season-high 160 yards rushing on Nov. 3, but has managed just 65 and 67 yards in the last two games.

O'Brien knows that his team needs to improve in this area as it chases a playoff berth.

"We have to spend a lot of time this weekend on the running game as coaches, see where we're at, what we're doing, because I think that's a key in the last stretch of the season here," he said. "You've got to be able to run the football."

LB Zach Cunningham had a career-high 16 tackles, which were the third-most in franchise history, to lead the defense. It was the fourth time this season that the third-year player has had at least 10 tackles and he leads the team with 95.

"He's a really good player, he's flying around, he's got a lot of good instincts, he's making good decisions relative to when to hit behind the ball or try to play over the top, and he's tackling well," O'Brien said. "Then he helps us on special teams, too, so he's done a good job for us."

WR Keke Coutee was inactive on Thursday despite being healthy. The move came after the second-year pro played last week after being active but not playing in the previous two games. Coutee, who has struggled with injuries in his short career, has 16 receptions for 179 yards this season.

1 — The Texans allowed just one sack on Thursday night after giving up seven in the loss to the Ravens.

The extra days before Houston's next game should help the secondary get healthy before the group has to deal with Brady and the Patriots. Watson looked good against the Colts but will need to limit his mistakes, and the Texans must get their running game going if they hope to get their first win over the Patriots since 2010.