Texans hit halfway mark with 1 win in another bad season 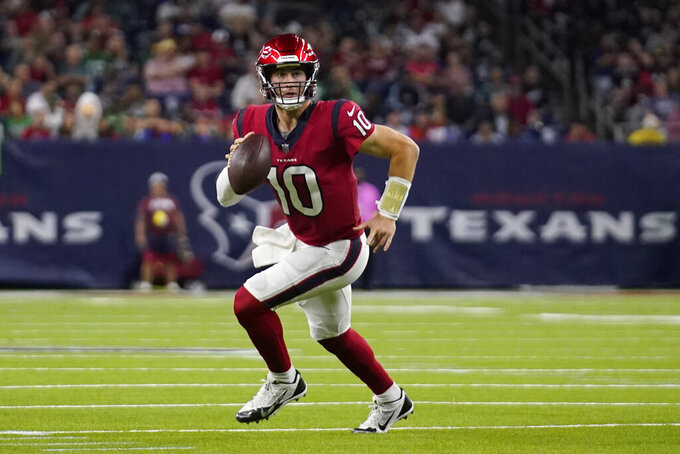 Houston Texans quarterback Davis Mills (10) scrambles in the second half of an NFL football game against the Philadelphia Eagles in Houston, Thursday, Nov. 3, 2022. (AP Photo/Tony Gutierrez)

HOUSTON (AP) — The Houston Texans look to be headed for their worst season in years.

The undefeated Eagles beat the Texans 29-17 on Thursday night, Houston's third straight loss since the season’s only win over the Jaguars on Oct. 9.

The Texans (1-6-1) have arrived at the halfway mark of the season as one of two NFL teams with a lone victory.

Houston had four wins in each of the last two seasons — and might not match that this season. The worst seasons in franchise history? In 2005 and 2013, with a 2-14 record.

At this point, it might be better not to win any more games so they can try to top the one-win Lions for the No. 1 pick in next year's draft; currently, the Texans are trailing Detroit for that right after squandering a 17-point fourth-quarter lead in a 20-20 tie with Indianapolis in the season opener.

Houston went with defense in the draft last year with the third overall pick — no elite quarterbacks were available — selecting cornerback Derek Stingley.

If this season keeps going downhill, they could have some great options in the draft to replace quarterback Davis Mills, who has not improved in his second season. Mills has 10 touchdowns with eight interceptions, capped by two in the second half against the Eagles.

For most teams, looking ahead to the draft this early would seem silly. But for fans of these Texans, it’s the only way to hold be optimistic with nine games left in what seems almost certain to be another dreadful campaign.

Virtually the only good thing about this team is the play of Pierce and Houston’s other rookies. Pierce, a fourth-round pick, has improved a running game that ranked 32nd in the NFL last season.

He had a career-high 139 yards rushing in Thursday’s loss to move into fourth in the NFL with 678 yards rushing.

“What we want to be a running football team, physical running attack — our tailback kind of says it all in what we would like to be,” coach Lovie Smith said.

Houston has eight rookies that have started at least one game this season. Stingley and safety Jalen Pitre, a second-round pick, have started every week.

“They’re on the football field because we think they give us the best chance to win,” Smith said. “We start with that. Are they our future? Yes. You really get excited talking about all of the young players that we have that are contributing right now getting better weekly.”

There's many things to choose, but the biggest problem is the run defense — again.

Smith, who was promoted from defensive coordinator to head coach this offseason, vowed to improve Houston’s run defense, which was ranked near the bottom of the league for the past two seasons.

Instead, things have gotten even worse. The Texans are allowing an NFL-high 180.6 yards rushing a game. Derrick Henry ran for 219 yards last week when the Titans torched Houston for 314 yards rushing — the second-most in franchise history.

Rookie TE Teagan Quitoriano made his NFL debut Thursday and grabbed a 2-yard touchdown pass on his first career reception on Houston’s opening drive. Quitoriano is a fifth-round pick who missed all season with a knee injury.

Veteran receiver Brandin Cooks was inactive Thursday night, two days after he wasn’t traded following days of speculation that it would happen.

Cooks didn’t play after not practicing all week.

Smith said it was due to personal reasons and expects Cooks, who leads the team with 354 yards receiving, to return to the team, though it’s unclear what his role will be moving forward.

If he doesn’t play in the upcoming weeks, it will be a blow to a passing game that is already struggling, averaging just 188.6 yards a game to rank 27th in the league.

WR Nico Collins missed a second straight game with a groin injury and could remain out next week, too. ... OL Justin McCray could return next week after getting a concussion in the game against the Titans.

251 – Pierce already has 251 more yards rushing than the paltry 427 that Rex Burkhead finished with as the team’s leading rusher last year.

With the season already lost, the last nine games will be a time for Houston’s rookies to continue to develop. The experience will be important as Houston tries to turn things around in 2023.