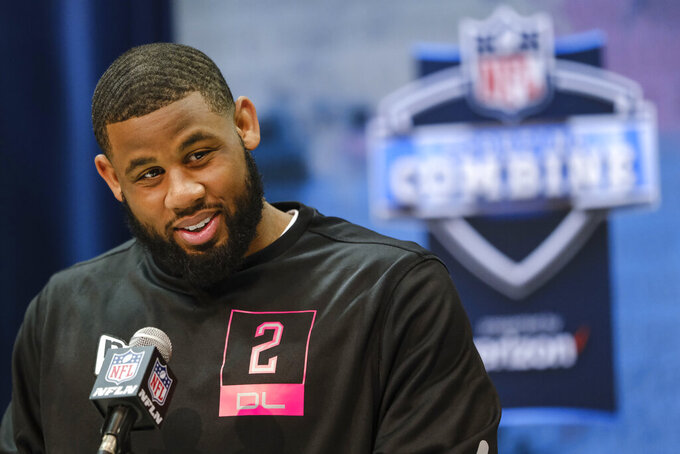 Ross Blacklock is extremely proud of his father, Jimmy, and the impact he made playing for the Harlem Globetrotters for more than a decade before becoming their coach.

It's just that the younger Blacklock knew early on basketball would not be his path.

“My dad, he’s a pioneer," Ross said. “He’s a walking legend. Basketball just wasn’t my first love. Football was my first love. I thought basketball was just too soft for me. I always used to foul out when I played AAU and stuff like that."

Ross made it a goal to make a name for his family in football. He took another big step in that journey Friday night when the TCU defensive tackle was taken in the second round of the NFL draft by the Houston Texans.

“My dad created a legacy in basketball for our family, so I think I was meant to do it for football," he said. “I’ll be the first person in my family to be in the NFL. So it’s a pretty good start for me."

The Texans really liked Blacklock entering the draft, but coach/general manager Bill O'Brien was worried he might get snatched up in the first round before Houston had a chance to pick.

“When we went to bed last night we were happy because this is a guy who came in to visit us ... he was in front of the whole coaching staff and that's hard," O'Brien said. “He answered all the questions, is a very impressive guy ... so we were thrilled to be able to draft him."

The Texans stayed with defense in the third round, selecting Florida linebacker Jonathan Greenard with the 90th pick. Greenard had 50 tackles and led the Southeastern Conference with 10 sacks and 16 tackles for losses last season after transferring from Louisville. He played three seasons at Louisville before missing the 2018 season with a wrist injury.

Greenard came to Florida as a graduate student and said he's just 18 hours shy of earning his MBA. He believes his year with the Gators was perhaps the most valuable of his career.

“I just learned how to play at a faster pace, playing in the best conference — the SEC — just playing with top-notch guys day in and day out ... and I couldn't have asked for a better situation for my last year of football," he said.

Blacklock, who was drafted at No. 40, was the Texans' first pick this year after they traded their first round slot to Miami in August as part of the deal for left tackle Laremy Tunsil and receiver Kenny Stills.

Blacklock had 40 tackles and 3 1/2 sacks last season in his return after missing the 2018 season with an Achilles injury suffered in a preseason practice.

He believes his time away from the field with his injury ended up being good for him. Unable to walk for quite some time, the only thing he could do was study the game.

“I was just learning and being more of a football player ... I spent more time on film," he said. “Even though I couldn’t be there most of the time because of my injury, I was always watching film as if I was still playing. Missing that season helped me mentally."

Houston was in need of depth on the defensive line after nose tackle D.J. Reader signed with the Bengals this offseason. They got it with the 6-foot-4, 305-pound Blacklock, who is from the Houston suburb of Missouri City, Texas.

He was a bit disappointed that he wasn't drafted in the first round, but going to a team just minutes from the home where he grew up made things easier.

“I’m beyond excited to be able to come back home and play for my hometown and be able to do good things for this city and play great football," he said.

The Texans have five picks when the draft wraps up on Saturday, starting with No. 111 in the fourth round.