Texans' QB Taylor back to face Mayfield, Browns in Week 2 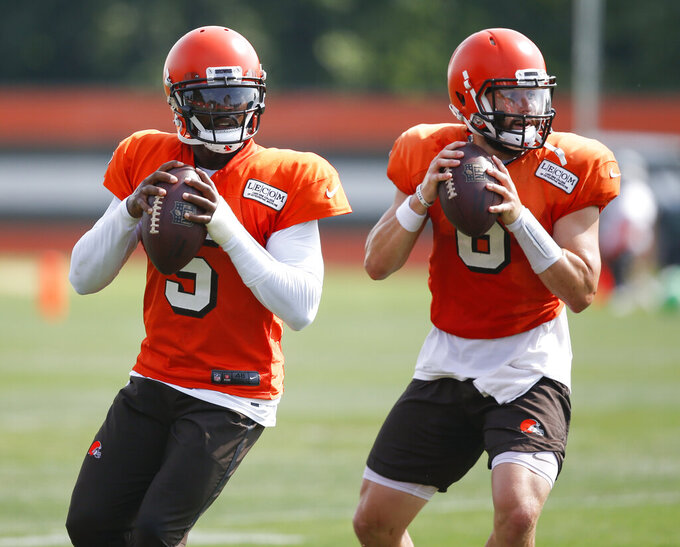 FILE - In this Aug. 27, 2018, file photo, Cleveland Browns quarterbacks Tyrod Taylor (5) and Baker Mayfield (6) throw during NFL football practice in Berea, Ohio. When Cleveland fans fill FirstEnergy Stadium on Sunday for the first time in nearly two years, they'll see several familiar faces on Houston's roster, including Taylor, who was briefly the Browns' starter when Mayfield was a rookie in 2018. (AP Photo/Ron Schwane) 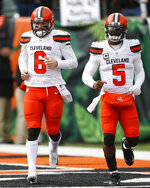 CLEVELAND (AP) — Brash and even a little belligerent, Baker Mayfield waltzed into the NFL thinking he had things figured out. He quickly learned he had a lot to learn.

When Cleveland fans fill FirstEnergy Stadium on Sunday for the first time in nearly two years, they'll see several familiar faces on Houston's roster, one of them Taylor, who was briefly the Browns' starter when Mayfield was a rookie in 2018.

Taylor only started three games, but Mayfield said the 32-year-old veteran had a major impact on his career.

“I think people took Tyrod for granted,” said Mayfield. "He’s an extremely good leader. His work ethic alone, just his routine and being the same guy every day for every single person in the building is a tremendous way of showing his leadership.

Taylor is coming off a strong debut in a win over Jacksonville for the Texans (1-0), who elevated him into the starting job this summer in the midst of Deshaun Watson's legal entanglements and his trade request.

Desperate to solve their quarterback issue three years ago, the Browns (0-1), who are coming off a Week 1 loss in Kansas City, traded a third-round pick to Buffalo for Taylor. The previous season he had helped the Bills end their long playoff drought.

Cleveland then chose Mayfield with the No. 1 overall pick, but he was not given a chance to beat out Taylor in training camp.

Things changed, though, in Week 3 when Mayfield replaced a concussed Taylor during a nationally televised Thursday night game against the New York Jets and rallied the Browns to their first win in 20 games.

Taylor's era in Cleveland may have been brief, but he helped shape Mayfield into the QB he is today.

“Everything that he taught me, leading by example and doing different things, not that we lead the same way, but there’s always different ways to learn,” Mayfield said. “I’m very thankful to have stepped in a QB room with Drew Stanton and Tyrod, that I was able to learn from those guys. It’s something I’m obviously very grateful for.”

Taylor said he hasn't closely followed Mayfield's career, but he was impressed by the young QB's quick rise in their one season together.

"I know they’re looking forward for him to have a big year this year.”

The Texans' red-white-and-blue uniforms are tinged with orange.

Houston has eight former Browns on its 53-man roster. And while Taylor said he's looking forward to being back in Cleveland and seeing friends, he's not returning with revenge in mind.

“It’s not about me,” he said. “It's about our team here and us working hard throughout this week and us executing on Sunday. It’s never about me or my feelings when it comes to going to play against previous teams.”

Browns center Joel Bitonio plans to catch up with Texans linebacker Christian Kirksey, who was in his 2014 draft class with Cleveland and spent six seasons with the club.

“We spent a lot of time here together,” Bitonio said. "Nothing really happens during the game, but after the game it’ll be good to say 'Hey' to those guys.”

One of Houston's primary problems last season was an inability to force turnovers. The Texans were last in the league with just nine.

“We have put an emphasis on it as a part of what we have to do to have success defensively,” Smith said. "So that part is good and as a coach you start looking at what other opportunities that you had. We haven’t played our best game, so we’ll need to be able to do that in order for takeaways to come.

Cleveland's star receiver was ruled out early in the week, further delaying his comeback from knee surgery last year. Beckham seemed to be a go in the opener against the Chiefs, but after pregame warmups he told the Browns he wasn't confident he could play as much as they needed.

“The most important thing is that he’s continuing to get healthy and when he’s comfortable enough he’ll be out there,” said Browns receiver Jarvis Landry.

On Sunday, it will be at full roar — or in this case, full bark.

Because of COVID-19 restrictions, only 12,000 fans were allowed inside the Browns' lakefront stadium in 2020. Those crowds were loud, but nothing like what Stefanski, who is in his second season, or the Texans will experience.

“I'm excited, man,” said Browns running back Nick Chubb. “It's been almost two years. I know the Dawg Pound will be out and we'll be rocking in FirstEnergy."