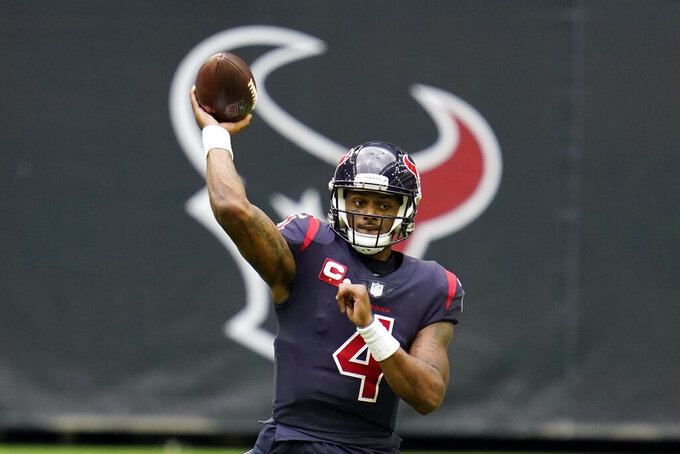 The claims in the six new suits, which were filed in a Harris County state district court, are similar those in the earlier cases. One of the latest lawsuits was filed by a woman who alleges Watson assaulted her on March 5 in Atlanta and that his behavior “is part of a disturbing pattern of preying on vulnerable women.”

All of the women who have sued Watson are either licensed massage therapists or worked in a spa or similar business and claimed that Watson exposed himself, touched them with his penis or kissed them against their will. One woman has alleged Watson forced her to perform oral sex. All but one of the alleged assaults took place in Houston, with one woman flown in from Atlanta, according to the lawsuits. The first alleged assault took place in March 2020.

Watson’s attorney, Rusty Hardin, declined to comment Monday on the latest lawsuits filed against his client. In a statement Friday, Hardin called the allegations “meritless.”

Watson, 25, has broadly denied he acted inappropriately and said last week in a statement he looks forward to clearing his name.

The 13 women, who have sued separately, have not been identified by name in the lawsuits and are represented by Houston lawyer Tony Buzbee. The women are each seeking compensatory and punitive damages, as well as court costs.

Buzbee has said he planned to submit affidavits and evidence from several of the women to authorities in Houston. Buzbee did not immediately return a call seeking comment Monday.

“It would be inappropriate for a district attorney’s office to comment in any way on a civil lawsuit and we refrain from publicly discussing allegations in any matter until and if a criminal charge is filed. We do this out of fairness to all,” said Dane Schiller, a spokesman for the Harris County District Attorney’s Office.

The NFL has said it was investigating the allegations against Watson.

Watson is one of the league’s top quarterbacks and led the NFL in yards passing last season. He signed a four-year, $156 million contract extension with the Texans last offseason, but he became unhappy with the direction of the team as Houston sunk to 4-12 and he requested a trade in January.