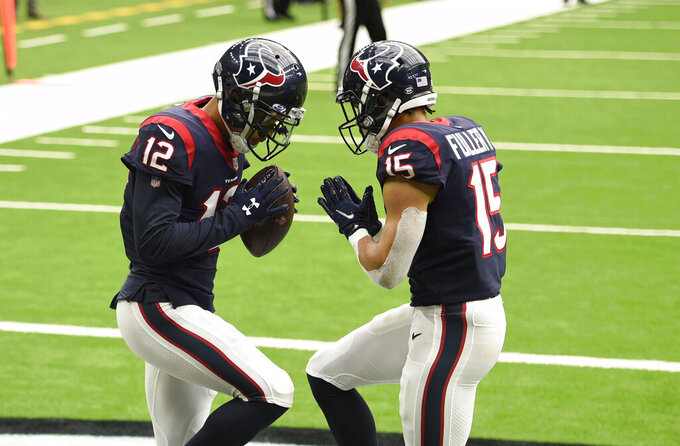 Houston Texans wide receiver Kenny Stills (12) celebrates his touchdown catch against the Minnesota Vikings with teammate Will Fuller (15) during the second half of an NFL football game Sunday, Oct. 4, 2020, in Houston. (AP Photo/Eric Christian Smith)

Despite being undermanned this season at the position after the offseason trade of All-Pro Deandre Hopkins to Arizona, Houston decided Friday to cut Stills.

Stills, 28 and in his eighth pro season, was struggling this year for the Texans (4-7). He has 11 catches on 19 targets and one touchdown. He rarely figured in the Deshaun Watson-led offense in 2020.

His release leaves Houston with Will Fuller and Brandin Cooks as the main wideouts.

Stills also has been an outspoken leader among NFL players in the social and racial justice movement. He spent much of his offseason involved in activism and has been at the forefront of the movement seeking justice for Breonna Taylor, the Black emergency medical technician in Louisville, who was killed when officers entered her apartment with a no-knock warrant during a drug investigation. The warrant to search her home in March was in connection with a person who did not live there, and no drugs were found inside.

Stills was among 87 people arrested this summer after they gathered at the home of Kentucky’s attorney general to demand that the police officers involved in her death be criminally charged.