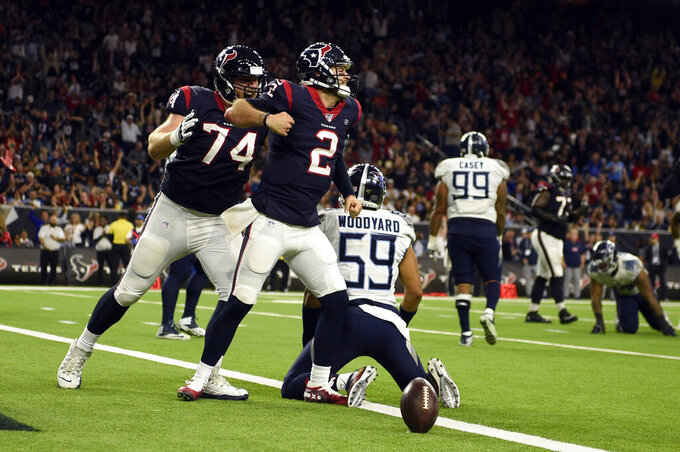 Houston Texans quarterback AJ McCarron (2) celebrates after scoring a touchdown as offensive guard Max Scharping (74) joins him while Tennessee Titans inside linebacker Wesley Woodyard (59) kneels at the goal line during the second half of an NFL football game Sunday, Dec. 29, 2019, in Houston. (AP Photo/Eric Christian Smith)

HOUSTON (AP) — The Houston Texans decided that resting some banged-up players before next week's playoff game was more important than winning on Sunday.

Derrick Henry rushed for a season-high 211 yards and three touchdowns and the Tennessee Titans beat the Texans 35-14 to clinch a playoff spot. The Texans beat the Titans two weeks ago to take control of the AFC South and locked up the division last week, allowing Houston to sit quarterback Deshaun Watson and other key players.

"Once we were getting closer to the beginning of the game, it was pretty obvious that our seeding wasn't going to change,” coach Bill O'Brien said. “So we decided to do those things in the best interest of the team.”

Watson was active on Sunday, but O'Brien started AJ McCarron instead. Watson was listed as questionable with a back injury this week but said he was OK. Receiver DeAndre Hopkins (illness) was also active, but did not play and several starters, including receiver Kenny Stills (knee), left tackle Laremy Tunsil (ankle) and nose tackle D.J. Reader, were inactive.

“The most important thing when you get to this part of the season is the health of the team,” safety Justin Reid said. “So everybody that got a chance to get healthy and be back next week, that's what's most important.”

McCarron threw for 225 yards with an interception and ran for a touchdown.

Houston was locked into the AFC's fourth seed after the Kansas City Chiefs beat the Los Angeles Chargers earlier Sunday. The Texans will host Buffalo next week.

“I think we're as healthy as we can possibly be at this time,” O'Brien said. “We need to come in here ready to go ... and have a good week of preparation.”

The Texans are expected to get three time Defensive Player of the Year J.J. Watt back against the Bills. Watt, who tore a pectoral muscle in October, returned to practice last week, but couldn't be added to the active roster until after Sunday's game.

It's unclear how much Watt will be able to play next weekend, but regardless of his snap count, everyone is thrilled about his return after he was thought to be done for the season.

“Anything he can give us from a playing standpoint will be great, but I just think that his presence alone is big,” veteran cornerback Johnathan Joseph said. “Just going out there with a guy like that, rushing to get back, beating the timetable, putting it on the line for his team, anytime you have a guy doing that, it's going to lift everybody else up, give them some extra juice and pump them up as well.”

Joseph injured a hamstring in the first half and didn't return, but said after the game that he is OK and expects to play next week.

McCarron scored on a 1-yard run in the third quarter that cut Tennessee's lead to 21-14.

“He made some good plays out there, made some good decisions,” O'Brien said. “It was tough sledding at time, but for a guy that had not played, this was a good opportunity for him to play.”