Texans search for ways to win after failing to finish again 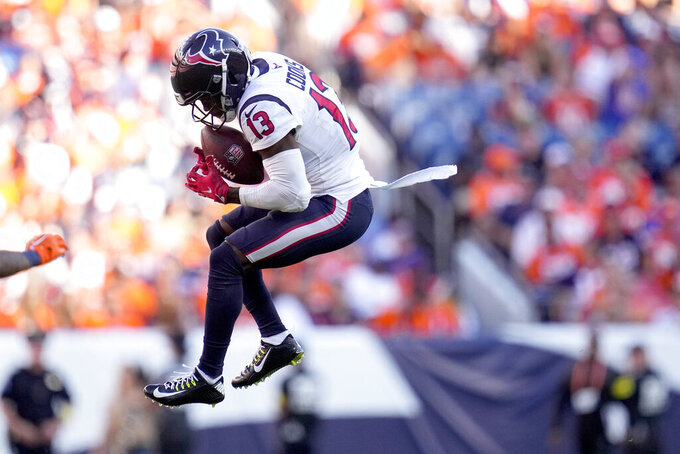 Houston Texans wide receiver Brandin Cooks (13) makes a catch against the Denver Broncos during the second half of an NFL football game, Sunday, Sept. 18, 2022, in Denver. (AP Photo/Jack Dempsey)

HOUSTON (AP) — The Houston Texans have done a lot of good things through the first two weeks of the season.

The one thing they haven’t done is find a way to finish a game, and that has them without a win heading into Sunday’s trip to Chicago (1-1).

The Texans (0-1-1) led entering the fourth quarter for a second straight week Sunday against the Broncos, but didn’t score after that in a 16-9 loss. That defeat comes after Houston was up 20-3 to the Colts entering the fourth in the opener before Indianapolis scored 17 unanswered points in a 20-20 tie.

“To me, finishing means you’re out there doing right longer,” defensive end Rasheem Green said. “So I felt like we were doing right for a large amount of the game, but we’ve just got to do it longer and better.”

Green, who joined the Texans after spending the previous four seasons with the Seahawks, said it’s difficult for teams that haven’t won much to learn how to win.

“We’ve got a team that is on consecutive losing seasons,” he said. “You kind of lose a sense of how to finish out those games because results start going the opposite way. But yeah definitely, just continue to do the same thing that we did that got us to that point, just execute and finish it out.”

The Texans had a shot to regain or cut into the lead after Denver went up 13-9 early in the fourth quarter on a TD pass by Russell Wilson. But quarterback Davis Mills was sacked for a 7-yard loss on third-and-7 to force a punt.

The Broncos added a field goal on their next drive and Houston had two more possessions to try and tie it. During the first drive, Mills was sacked again and fumbled. The Texans recovered but he threw incompletions on two of the next three plays to turn it over on downs.

Houston got the ball back one last time with about a minute left, but Mills threw three straight incomplete passes to give the ball back to the Broncos and allow them to run out the clock to secure the win.

“We stalled,” coach Lovie Smith said. “We’re not there yet. It’s kind of simply that. We show flashes of what we can be ... in games, you’ve got to (be) able to pass the ball. At the end it went down by seven. It was going to be a passing game and we weren’t able to come through.”

Houston’s defense has given up a lot of yards through the first two games, but has been able to bear down in the red zone and limit scoring. Entering Monday, the Texans rank 11th by allowing just 18 points a game after giving up more than 26 a game last season.

“There are some bright moments," Smith said. “Defensively we've played two games (and) we’ve given up three touchdowns. That’s hard to do."

The unit has also done a good job of forcing turnovers so far and has three, with two interceptions and a fumble recovery.

Mills needs to move the ball more effectively and consistently. The second-year player has shown flashes of improvement this season, but has been unable to move the ball in crunch time through the first two weeks.

“We needed to make more plays and just capitalize on our opportunities,” he said. “The plays are there, we just have to make them.”

Rookie RB Dameon Pierce had 15 carries for 69 yards and was solid in pass protection a week after managing just 33 yards on 11 carries in his NFL debut.

CB Derek Stingley Jr., the third overall pick in this year’s draft, had two pass interference penalties, including one for 42 yards that helped Denver to its first score Sunday.

Houston LB Kevin Pierre-Lewis (groin) and TE Brevin Jordan (ankle) were injured against the Broncos and Smith said they'd know more about the severity of the injuries later in the week.

The Texans need to clean up their mistakes and find ways to move the ball better late if they hope to get their first win of the season against the Bears.