Texans set to move on from Clowney, get franchise LT Tunsil 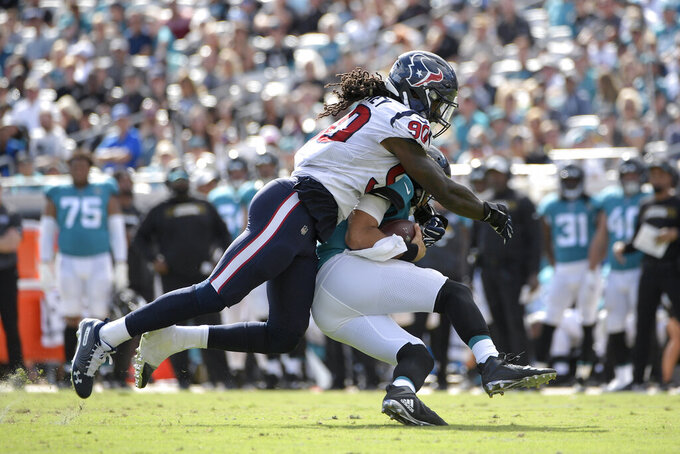 FILE - In this Oct. 21, 2018, file photo, Jacksonville Jaguars quarterback Cody Kessler is sacked by Houston Texans linebacker Jadeveon Clowney (90) during the second half of an NFL football game in Jacksonville, Fla. Two people with knowledge of the deal say the Seattle Seahawks are on the verge of acquiring Clowney from the Texans. Such a move would bolster one of Seattle's biggest needs heading into the season. The people spoke to The Associated Press on condition of anonymity Saturday because the deal is still pending a physical and had not been completed. Seattle reportedly is sending a third-round pick and two players back to Houston. (AP Photo/Phelan M. Ebenhack, File)

HOUSTON (AP) — The Houston Texans are set to move on from first overall pick Jadeveon Clowney and get a franchise left tackle in Laremy Tunsil in the biggest moves amid a flurry of trades on Saturday.

The Texans traded disgruntled defensive end Jadeveon Clowney to the Seahawks according to two people with knowledge of the deal and got Tunsil and receiver Kenny Stills from the Dolphins for a package which includes two first-round picks and one second-rounder, a person familiar with the deal told The Associated Press.

Houston also picked up running back Carlos Hyde in a trade with the Chiefs and got cornerback Keion Crossen in a deal with the Patriots.

Houston got a rather modest return for Clowney, the first overall pick in 2014 and a three-time Pro Bowler. But the deal gives the Texans a resolution on his future after he'd kept them in limbo by holding out all of training camp unhappy that he didn't get a long-term deal and was assigned a franchise tag.

In return for Clowney, the Texans will reportedly receive defensive end Barkevious Mingo, linebacker Jacob Martin and a third-round pick next season. Mingo was the sixth overall pick in the 2013 draft, but has never been the game-changer than Clowney had developed into in the past three seasons after finally getting healthy. But Mingo, who moved from outside linebacker to defensive end this offseason, could get a boost from joining a defense starring three-time Defensive Player of the Year J.J. Watt. Martin is beginning his second season after appearing in each game last season and finishing with three sacks.

While the Texans lost one of their top defenders by trading Clowney, they vastly upgraded their offense with the three players they added on that side of the ball.

Tunsil is the most important part of their offensive haul, filling a dire need to upgrade an offensive line that allowed Deshaun Watson to be sacked an NFL-leading 62 times last season.

The team had been criticized for failing to make any major moves this offseason to better protect their franchise quarterback. They signed veteran left tackle Matt Kalil, but there were questions about whether he would do much to improve the line after struggling with injuries for years.

In their brief history, the Texans have been plagued with problems on the offensive line starting with their first-ever No. 1 pick David Carr, who failed to live up to expectations in part because of the constant beating he took behind shoddy protection.

While Watson started every game in his second year last season, he played hurt for a good chunk of the schedule while dealing with a partially collapsed lung and broken ribs from taking hit after hit.

The Texans hope that Tunsil will help ensure that Watson takes far fewer blows this year. The young and talented Tunsil has already proven to be one of the top left tackles in the league in his short career and has started 44 games in three NFL seasons.

Tunsil, who was the 13th overall pick in the 2016 draft, joins a line that features center Nick Martin, a second-round pick in 2016, rookie first-round pick Tytus Howard at left guard.

Houston also got a boost at receiver with the addition of Stills, who joins a solid group led by DeAndre Hopkins, and also has Will Fuller and Keke Coutee, who have both missed significant time with injuries. Stills, who has been outspoken on social issues, spent his first two seasons in New Orleans before playing for the Dolphins for the past four seasons.

The addition of Hyde comes after Houston lost starting running back Lamar Miller for the season to a knee injury he sustained in the team's second preseason game. Hyde spent his first four seasons with San Francisco before splitting time between Cleveland and Jacksonville last season where he ran for 571 yards.

He's likely to get plenty of playing time in Houston with the Texans lacking much proven depth behind Duke Johnson, who was thrust into the starting role after the injury to Miller, the team's featured back for the past three seasons. Johnson was acquired from the Browns in a trade earlier in this month after Houston cut D'Onta Foreman.