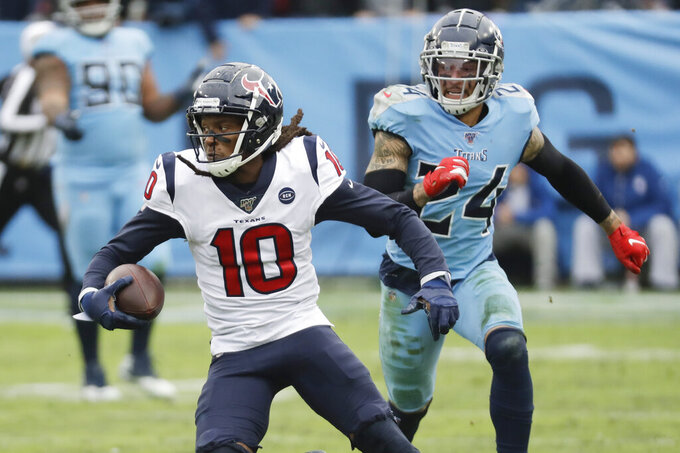 NASHVILLE, Tenn. (AP) — The Houston Texans took charge in the fourth quarter, and now they have control of the AFC South with two games remaining.

The defending division champs are looking for Houston's fourth AFC South title in six years under coach Bill O'Brien. The Titans haven't won this division since 2008, and Mike Vrabel is Tennessee's third coach since.

Carlos Hyde ran for 104 yards and scored a TD with 10:34 left and Ka'imi Fairbairn's 29-yard field goal with 3:26 remaining provided the winning margin as the Texans scored 10 straight points in the fourth quarter to beat the Tennessee Titans 24-21 on Sunday.

"We had to lock in,” Texans quarterback Deshaun Watson said. “That’s what we did. It came down to that fourth quarter of standing up, getting up and getting a drive in and getting points on the board and defense making a stop. Yeah, it was just something that we definitely didn't want to let it slip out of our hand.”

Now the Texans (9-5) must travel home with a short week before going to Tampa Bay on Saturday before hosting the Titans (8-6) again in the regular season finale.

"I don’t think we should even think one second about anything other than Tampa Bay, and that should be the whole goal,” O'Brien said of the Texans' improved chances of winning the division.

The Texans nearly blew a 14-0 halftime lead with Tennessee intercepting Watson twice inside the Titans 1.

The Titans snapped a four-game win streak with only their second loss in seven games. Now they will need help in the final two games to earn their second playoff berth in three seasons.

When the Titans tied it at 14 early in the fourth quarter, the Texans scored 10 straight points. Hyde ran for a 10-yard TD, then Fairbairn's field goal finished Houston's scoring.

“We had to have an answer there,” O'Brien said.

The Titans forced a punt with 28 seconds left. LeShaun Sims fielded the punt at the Titans 1 instead of letting the ball go into the end zone. Tannehill was sacked, then spiked the ball with a second on the clock. Officials ruled time had expired.

“It was just too little too late,” Tannehill said. “We had many opportunities in the first half and weren't good enough."

Tennessee outgained Houston 432-374. Tannehill threw for 279 yards, ran for a 1-yard TD, but also was intercepted at the goal line. Derrick Henry snapped a four-game stretch of 100-yard rushing games, finishing with 86 yards on 21 carries for Tennessee.

This game featured a pair of 14-point swings and three interceptions combined around the goal line.

The first came in the second quarter when the Titans had first-and-goal at the Houston 5 when Tannehill's pass to Anthony Firsker popped out on a hit by Reid. Texans linebacker Whitney Mercilus ran 86 yards to the Tennessee 14. Watson hit Kenny Stills two plays later for a 12-yard TD and a 7-0 lead.

The Texans then forced Tennessee three-and-out with Henry watching from the sideline, and Watson drove Houston 72 yards. He found Stills again with a 16-yard TD pass for a 14-0 lead.

After Tennessee staged a 15-play drive capped by a 1-yard TD run by Tannehill, the Texans had second-and-goal at the Tennessee 4. Titans rookie defensive tackle Jeffery Simmons tipped a Watson pass that was picked off by linebacker Jayon Brown in the end zone inside the final minute of the third quarter.

The Titans turned that into a 5-yard TD pass from Tannehill to A.J. Brown for the tying TD.

With Will Fuller back, the Titans helped hold Hopkins to just two catches for 21 yards through three quarters. Hopkins had four catches for 98 yards in the fourth quarter and finished with six catches for 119 yards. It was his second straight 100-yard receiving game, fifth this season and 30th of his career. That's second-most through seven seasons in franchise history only to Andre Johnson (31).

“I was able to get the ball to him and just let him go to work,” Watson said.

Ryan Succop is 1 of 6 since being activated off injured reserve for the Titans, who already ranked last in the NFL in field goal percentage. Texans lineman Angelo Blackson blocked his 45-yard field goal attempt in the first quarter after Vaccaro's interception.

“I'm out here battling,” Succop said. “I'm doing everything that I can, and unfortunately just haven't been as good as it needs to, obviously.”

Houston linebacker Jacob Martin went down, but walked to the sideline with about three minutes left. Linebacker Benardrick McKinney followed a play later and did not return with a concussion.