Texans take step back with embarrassing loss to Bears 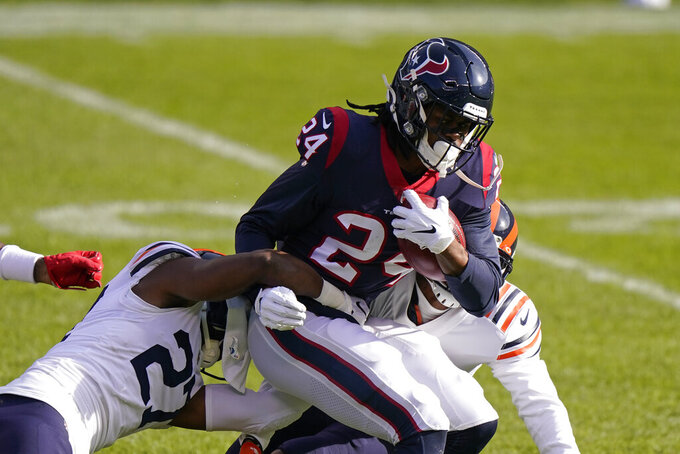 HOUSTON (AP) — After coming one play short of beating the Colts last week, the Houston Texans took a big step back Sunday with a blowout loss to a Chicago team that entered the game having dropped six straight.

Houston didn’t do much right in the 36-7 defeat and now must try and regroup and prepare for a rematch against Indianapolis this Sunday.

“Our performance was embarrassing,” defensive end J.J. Watt said. “It’s just the facts of what it was.”

Interim coach Romeo Crennel agreed and said it was the most disappointed he’s been in the team since he took over after coach Bill O’Brien was fired following an 0-4 start.

“We didn’t play the way we’ve been playing the last couple of weeks,” Crennel said. “We didn’t go out and compete the way you need to compete to give yourself a chance to win. Why that occurred, I’m not sure. I don’t know whether the stress of the season got to them, whether they thought that because Chicago had lost six in a row that it was going to be easy, but we tell them there are no easy games in the NFL.”

Things went wrong immediately against the Bears when David Montgomery took a handoff on their first offensive play and went 80 yards for a score. It was a deflating play for a run defense that had looked better in recent weeks, but thanks in large part to that play allowed the Bears to run for a season-high 169 yards.

Deshaun Watson did what he could to lead the team on a day the Texans played without running back David Johnson and numerous receivers. He connected with Keke Coutee on a 5-yard TD pass that cut the lead to 14-7 in the second quarter, but the Bears scored 22 straight points after that to sail to the easy win.

Watson’s play is really the only good thing about this team right now. He ranks second in the NFL with 3,761 yards passing and has kept the offense together despite the suspension of top receiver Will Fuller and injuries to many other skill players. The Texans were eliminated from playoff contention with the loss to the Bears and Watson has taken a pounding lately, but Crennel has no plans to sit him in the last three games.

Houston’s offensive line has been terrible in the past two games after protecting Watson decently through the first 11 games. Watson was sacked a season-high six times Sunday after getting sacked five times against the Colts. He has been taken down 39 times this season, which ranks third in the NFL and has been sacked in the end zone for a safety in each of the last two games.

While Crennel knows the line must do better, he noted that Watson needs to get rid of the ball quicker at times.

WR Chad Hansen has stepped in to make up for the loss of Fuller in the last two games. He had a career-high 101 yards receiving last week in his first game since 2017 and led the team with seven receptions for 56 yards on Sunday.

TE Jordan Akins has had just 30 yards receiving combined in the last three games after finishing with a season-high 83 yards receiving in a Week 11 win over New England. He was wide open in the end zone on Sunday, but failed to score when he lost the ball in the sun and Watson’s pass bounced off him and fell incomplete.

Johnson could return this week after he missed Sunday’s game after being in close contact with someone who tested positive for COVID-19. ... Crennel said he doesn’t think WR Randall Cobb, who has missed the last three games with a toe injury, will play again this season. ... WR Brandin Cooks is expected to return this week after missing Sunday’s game with foot and neck injuries. ... DT Brandon Dunn has a hip injury and Crennel said X-rays were negative but that he’s undergoing more tests and might be out this week.

86.2 — The Texans rank last in the NFL by averaging just 86.2 yards rushing. They have not been able to run the ball effectively all season as Johnson has struggled in his first year in Houston after the trade for DeAndre Hopkins.

The Texans played well against the Colts two weeks ago and likely would have won if not for Watson’s fumble near the goal line after a bad snap. If they caught Indianapolis off guard in the first meeting, that won’t happen again this week as the Colts look for a win to move closer to clinching a playoff spot.

Houston will have to play with better effort and limit mistakes and turnovers if the team hopes to avoid losing its third straight.