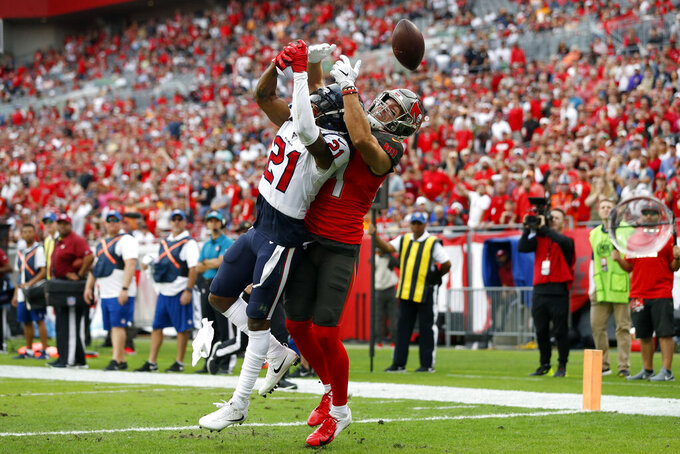 TAMPA, Fla. (AP) — The Houston Texans aren't satisfied with being AFC South champions for the fourth time in five years.

They feel as if they're just getting started and donned T-shirts Saturday declaring: “The South Is Not Enough."

“This is not the ultimate goal. This is one goal to get us to where we want to go," quarterback Deshaun Watson said after the Texans held off the Tampa Bay Buccaneers 23-20 Saturday to ensure another trip to the playoffs.

“For the ultimate goal, we got our shot," Watson added. “We have our opportunities, so we definitely want to celebrate this and build on this one, then finish up next week and get ready for the big show."

The Texans forced five turnovers and Bradley Robby returned one of the four interceptions of Jameis Winston 27 yards for an early touchdown — the sixth pick-6 the Bucs quarterback has thrown this season.

“Anytime you win a division in this league it’s important," coach Bill O'Brien said. “We’ve done it four out of the last five years. To win the division with one game left to play says a lot about this team. It’s a resilient team. They work hard, they come to work everyday and they try to do what we ask them to do.”

The Texans (10-5) won despite not getting an especially sharp performance from Watson, who completed 19 of 32 passes for 184 yards and one interception. The Bucs (7-8) sacked him five times and held Houston to one offensive TD on Carlos Hyde’s 1-yard run in the second quarter.

The Texans ended Tampa Bay's four-game winning streak and are AFC South champs for the second straight year. They join the Patriots and Chiefs as the only teams with four division titles since 2015.

“It’s a good accomplishment.... I think it shows some level of consistency," O'Brien said. “Obviously we’ve got a long way to go, but it’s a great accomplishment."

A week after becoming the first player in NFL history to throw for more than 450 yards in consecutive games, Winston was 25 of 48 for 335 yards and one touchdown. He tossed an interception on Tampa Bay’s opening drive for the fifth time in seven games, and nearly watched Houston go up 14-0 when Justin Reid intercepted him on the Bucs’ next possession.

Instead, the Texans settled for a field goal after a penalty for a blindside block negated what also would have been a 27-yard return for a TD. Hyde’s TD, set up by Peyton Barber’s fumble, put the Texans up 17-3.

“I can't do it," Winston said of his 11th career game with at least three interceptions, the most in the NFL since he entered the league as the No. 1 overall pick in the 2015 draft. “I have a snap-and-clear mentality, but I just can't (throw interceptions)."

A resilient Winston, playing with an injury-depleted group of receivers, rallied the Bucs with a pair of touchdowns in the last two minutes of the opening half to make it 17-17 on his 8-yard scoring throw to Justin Watson.

“He's a gunslinger. He'll throw a pick, and on the very next play, he'll throw a fade," Reid said of Winston. “It doesn't bother him. He's going to throw the ball down the field on the next play."

The teams traded third-quarter field goals, setting the stage for Watson to complete his longest throw of the day — 39 yards to DeAndre Carter — to move the Texans into position for Kai'imi Fairburn to put them ahead for good with a 37-yard field goal midway through the fourth quarter.

“(Winston's) a great player and we really didn’t take advantage of the interceptions that he threw," O'Brien said. "We only scored I think 10 points on them. So we’ve got to do a better job of playing complementary football because if you let a guy like that hang around he’s a dangerous player.”

The Bucs out-gained the Texans 435 yards to 229, including a 106-68 edge on the ground. Nevertheless, Tampa Bay did not dominate time of possession. The Bucs finished with 30 minutes, 28 seconds. Houston had the ball for 29:32.

Tampa Bay had five sacks, none by NFL sack leader Shaquil Barrett, who remained tied with Hall of Famer Warren Sapp for the Bucs' single-season record of 16½. Linebacker Jason Pierre-Paul finished with 3, giving him 6½ this season.

Texans: Hyde (ankle) and wide receiver Will Fuller (hamstring) were active after being listed as questionable on the injury report. Fuller left in the second quarter with a groin injury and did not return, finishing with two catches for 11 yards.

Buccaneers: In addition to playing without Chris Godwin (hamstring), Winston was without wide receivers Mike Evans and Scotty Miller, who were placed on injured reserve earlier in the week.

Texans: Home vs. Tennessee next Sunday.