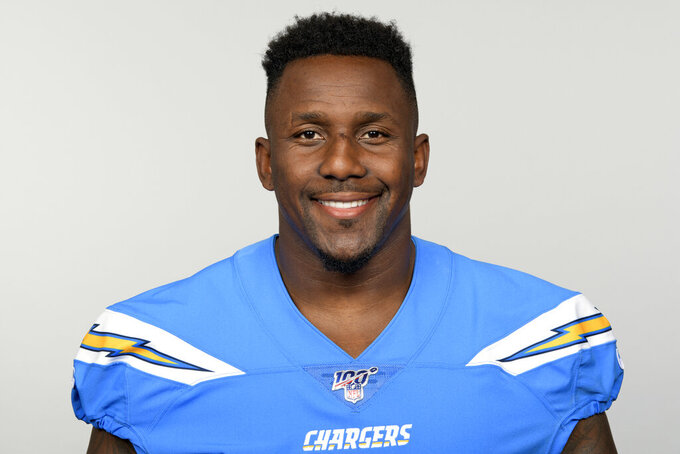 FILE - In this June 10, 2019, file photo, Los Angeles Chargers' Thomas Davis poses in Costa Mesa, Calif. The 36-year old linebacker, who was the one of the few additions the Chargers made during free agency, is already making an impression during the early stages of training camp. Davis inked a two-year deal with the Chargers after spending 14 seasons with Carolina. (AP Photo/File)

COSTA MESA, Calif. (AP) — Thomas Davis is the only remaining defensive player from the 2005 draft still playing, but he doesn't appear to be slowing down.

The 36-year old linebacker, who was one of the few additions the Los Angeles Chargers made during free agency, is already making an impression during the early stages of training camp. Davis signed a two-year deal with the Chargers after spending 14 seasons with Carolina.

"He literally watches everybody on the field, making sure you're doing what you're supposed to do," safety Derwin James said. "I love him, so having him and seeing him run to the ball at his age — I mean he looks like he's 24."

Davis is expected to bring leadership to a young linebackers room that has only two other players with four or more years of experience. It was also a group that struggled with injuries last season as all three starters ended up on injured reserve. The injuries at linebacker was one reason why the Chargers used seven defensive backs on all but one play in last season's wild-card round game at Baltimore.

When it comes to leadership, Davis is trying to do that through his work on the practice field.

"You can't be willing to go out and tell somebody to do something that you're not willing to do," he said. "When it comes to understanding what offenses are trying to do to you, when you see certain things from a formation standpoint, you try to talk, communicate and make sure that we're all on the same page. That goes across the board. It's not just for me talking to Derwin, but it's for the whole defense."

The Chargers — who are looking to make consecutive playoff trips for the first time since 2009 — are a contender to reach the Super Bowl after tying for the AFC's best regular-season record last year (12-4). Even though Davis wasn't with Los Angeles last season, he does have some experience with teams who have not lived up to expectations.

"They had a good season last year, but that doesn't predicate or determine how this season is going to be and everybody understands that," he said.

While Davis is trying to be a mentor to the other linebackers while he is trying to get acclimated to the Chargers' scheme. Coach Anthony Lynn has been pleased with Davis' progress in learning things.

Davis has been seeing plenty of snaps at outside linebacker. Denzel Perryman is expected to line up in the middle with Jatavis Brown, Kyzir White and Uchenna Nwosu vying for the other outside starting spot. Brown though is on the physically unable to perform list and might not return until the third week of training camp.

Lynn added that he plans to limit Davis' snaps during preseason games and later in training camp to make sure he is fresh for the opener Sept. 8 against Indianapolis. Lynn has said throughout the offseason that he doesn't plan on playing his starters much during the preseason since there are joint workouts with the Rams and Saints.

As for the linebackers, Lynn thinks they will improve from last season. Despite the struggles at linebacker, the Chargers still were ranked ninth in total defense, the first time they were in the top 10 since 2014.

"Yeah, I like the group. I think there is a little more depth than what we had last year and definitely experience," Lynn said.