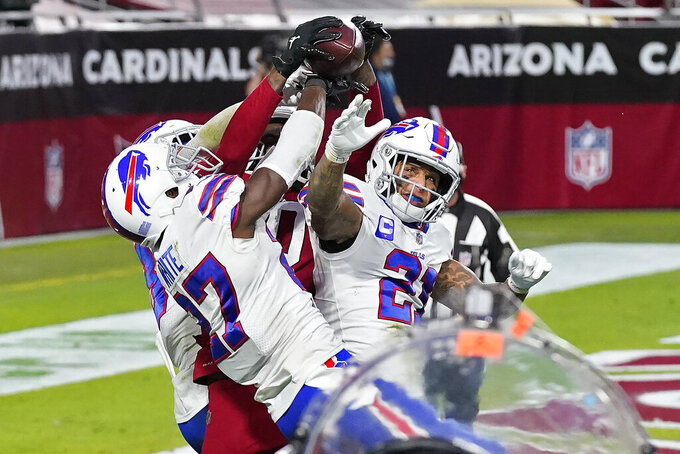 GLENDALE, Ariz. (AP) — The high the Arizona Cardinals are riding right now comes at a good time considering their next game is Thursday night.

The Cardinals have a 6-3 record and are in a three-way tie for first place in the NFC West after their stunning 32-30 win over the Buffalo Bills. DeAndre Hopkins made an improbable catch over three Buffalo defenders with 2 seconds left, securing the 43-yard touchdown catch that set off a huge celebration on the Arizona sideline.

Now Arizona is preparing for a game on the road against division rival Seattle. It's another chance for second-year quarterback Kyler Murray, Hopkins and the rest of the Cardinals to show what they can do on a national stage.

“It obviously gives us some confidence," Kingsbury said. "We know it’s going to be another dog fight on Thursday and we’ve got to get healthy and healed up quickly. Celebrate this one for a few hours tonight and be ready tomorrow, because it will come fast.

"Our guys like playing when the spotlight is on us and I’m excited about Thursday night.”

The Cardinals' offense continued to pile up the yards and points against the Bills. Murray threw for 245 yards and a touchdown and also ran for 61 yards and two touchdowns. Hopkins had seven catches for 127 yards and the last-second TD.

Hopkins' performance came one week after he had a season-low three catches for 30 yards against the Dolphins. Coach Kliff Kingsbury wasn't going to let that happen again.

The worst news for the Cardinals from the game is that veteran DL Corey Peters is likely out for extended time with a knee injury. Kingsbury said Monday he didn't have an update, but acknowledged it didn't look good.

Arizona's offense continues to play at a very high level, particularly the running game. The trio of Kenyan Drake, Chase Edmonds and Murray is among the most productive in the league and seems to get better as games progress. The three combined for 217 yards rushing against the Bills: Drake had 100 yards, Murray had 61 yards and two TDs, and Edmonds had 56 yards.

The defensive line is hurting. If Peters is out for an extended amount of time, which looks likely, the Cardinals might have to look outside the organization for some help. They were down to three healthy defensive linemen by the end of the game with Josh Mauro, Angelo Blackson and Trevon Coley.

Placekicker Zane Gonzalez. He made all four of his field goal attempts one week after missing a 49-yarder against the Dolphins that would have tied the game late in the fourth quarter. Gonzalez has generally been solid during his tenure with Arizona, but he needed a good bounce-back game.

Kingsbury's play calling. Everyone will remember Sunday's game because of Hopkins' miracle last-second catch, but that masked a pretty rough fourth quarter for the Cardinals' offense. Arizona had chances to pull away but some questionable play calls that turned into incomplete passes — instead of running plays that could have eaten some clock — gave Buffalo the chance to take a 30-26 lead late.

Peters is the big one. The veteran DL is productive on the field and also a big presence in the locker room. The Cardinals are already without 2019 All-Pro LB Chandler Jones, out for the season after a biceps injury in October. Other players such as LB De'Vondre Campbell (calf) and TE Darrell Daniels (ankle) are nursing injuries.

2 — Sunday's game between the Bills and Cardinals was just the second in the past 60 years that featured two go-ahead touchdown passes in the final 40 seconds of regulation, according to Elias Sports Bureau. The Bills scored with 34 seconds left on Josh Allen's TD pass to Stefon Diggs before the Cardinals' last-second heave.

The Cardinals have pretty much established an identity nine games into the season: The offense is really good and the defense is usually good enough. Arizona's defense will get another tough test on Thursday against Seattle and Russell Wilson.