Through persistence, Kelly positions himself to run a team 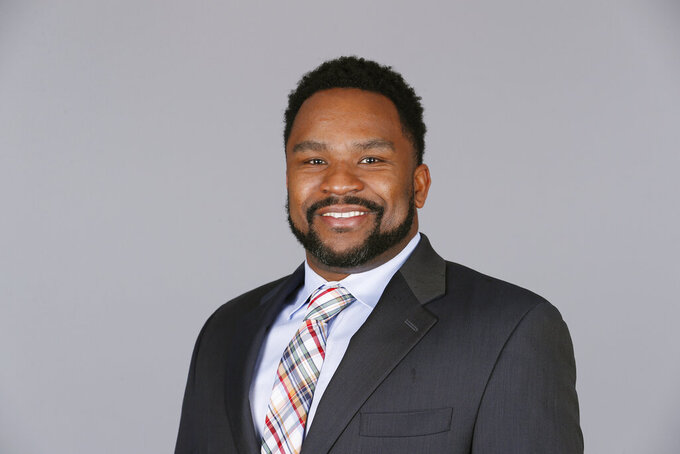 FILE - This is a 2019 photo of Champ Kelly of the Chicago Bears NFL football team. This image reflects the Chicago Bears active roster as of Thursday, May 2, 2019 when this image was taken. Champ Kelly remembers sending handwritten and typed letters to every NFL team and the rejections that came in return. He did it four times a year over four years, hoping to get his foot in the league. Once the opportunity came, he made several jumps. Now Chicago's assistant director of player personnel, he hopes to make another big leap. He has his sights set on becoming a general manager, maybe even the Bears' with the team looking to fill an opening. (AP Photo/File)

LAKE FOREST, Ill. (AP) — Champ Kelly remembers sending handwritten and typed letters to every NFL team, and the rejections that came in return.

He did it four times a year over four years, hoping to get into the league. Once the opportunity came, he made several jumps.

Now Chicago's assistant director of player personnel, he hopes to make another big leap. He has his sights set on becoming a general manager, maybe even the Bears' GM with the team looking to fill an opening.

“What drives me is to invest in people, to treat people right, to help an organization win, to be accountable, to be consistent, to be faithful like that,” Kelly said. “Those are things that truly drive who I am.”

The Bears are searching for a general manager and coach after firing Ryan Pace and Matt Nagy in the wake of a 6-11 season.

Kelly has made his mark since joining the organization in 2015. He got promoted to his current job two years later.

His experience on the personnel and scouting side, along with his ability to relate to players and coaches, make him a popular figure at Halas Hall.

Star linebacker Khalil Mack tweeted his support. So did former Bears linebacker Sam Acho, who described Kelly as an astute talent evaluator who is “passionate” and has a “brilliant football mind.”

“He is a positive, a positive, motivating type of person,” Bears secondary coach Deshea Townsend said.

Kelly didn't have an easy path to the NFL. He grew up in a small Florida panhandle town, had a father who sold drugs and a mother who was addicted.

He played at Kentucky, worked in the information technology field and finally got a job in the NFL after those years of rejections. He's now a high-ranking executive for a charter franchise, a Black man hoping to get his chance to run a team in a league in which few minorities are in charge.

There were five minorities GM jobs this season among the 32 teams.

“If we’re ever going to get to where we want to be at as a league, then we need that diversity not just in Black and white, but diversity of thought, whether it is male, female,” Kelly said. “Whether it is different religions. It’s just a different perspective on how we attack the same situation, and we’re going to grow because of that if we allow that growth.”

From Day 1, Anthony Kelly was a “Champ.”

His mom, Marcia Sorey, gave him that nickname following a difficult labor that began on her birthday and ended the next day: Nov. 27, 1979.

Kelly grew up in his maternal grandparents' small, crowded house in Campbellton, Florida, a town of about 200 that was the site of a skirmish in the waning days of the Civil War. Two uncles, his mom and her two sisters lived there. And when he was young, Kelly slept between his grandparents. Eventually, they added a third bedroom.

Sorey, who died in 2006, would disappear for days and sometimes weeks on end while she was on a binge.

Kelly described his mother as a “strong, feisty lady” who “taught me to fight.” And he took comfort knowing that her love for him would lead her to return from those binges.

He had a “strong, motherly figure" in his grandmother and family matriarch Mary Sorey, who stressed faith. Grandpa June Sorey, Kelly's main male figure growing up, worked at the same lumber yard for more than 40 years, and showed him the value of hard work and humility.

That message was also hammered home by his parents.

His mom told him “the world was not going to give me anything and that if I wanted it, I had to earn it.” His father Michael Kelly, whom he is close with, stressed being the best at what he does.

“(What) I’m trying to do is maximize the gifts in which God has given me,” Kelly said. “It would almost be a sin not to not try to use what he’s blessed me with. And I do believe, like when you go through situations like I did when I’m younger, you kind of hide those gifts. You don’t feel as confident. You don’t feel as in power to use some of the tricks that you’ve been blessed with.”

Sports helped him develop an appreciation for working with other people to achieve a common goal. Kelly earned a football scholarship at Kentucky, where he was a defensive back and wide receiver from 1998-2001.

He met his wife Stephanie there and studied computer science, an interest that started to take hold when he was 12 or 13. He hoped to work at IBM someday, a goal he realized when he got a job in the company's Lexington branch while earning his master's and preparing for potential NFL workouts.

Kelly, who also played some arena ball, started helping a friend coach at Lexington Christian Academy. That helped ignite his desire to work in the NFL, as a coach or in the front office.

He kept at it despite all the rejections, selling teams on his knowledge of computers and analytics. Along the way, he developed contacts.

Teams had a tough time grasping that Kelly just wanted to get in the door. They would tell him he's overqualified for, say, an entry level internship they had open.

“I wanted it so, so bad because I knew that’s where I belonged,” he said. “And it was hard for me to portray to people that it wasn’t just lip service.”

Kelly and some others started to lay the foundation for a sports agency. But the day their loan was approved, Denver hired him in 2007.

The agency never got off the ground. His NFL career took off.

Then-Broncos executive Jim Goodman, who tried to recruit Kelly to Rice as an assistant coach, helped get him a job as a Northeast region college scout. He got promoted several times, up to assistant director of pro personnel, over eight years in Denver.

In that role, he helped sign eight free agents who went on to make the Pro Bowl.

“You understood that there is no question that this guy did his homework," said Bears tight ends coach Clancy Barone, an assistant in Denver when Kelly was there. “He knows all the ins and outs about every player that we had discussed, about every team that we were going to play, and that was when he was fairly young in this league.”

Kelly has interviewed in the past for GM jobs with the New York Jets, Carolina and Denver. He made his case with the Bears this time.

“My desire, more so than anything, is to be able to invest into the players, to be able to lead through love,” he said. “The title that I have does not dictate me being able to do those things. So being a GM, would love it. But my purpose can still come to fruition, whether I’m a general manager or not.”