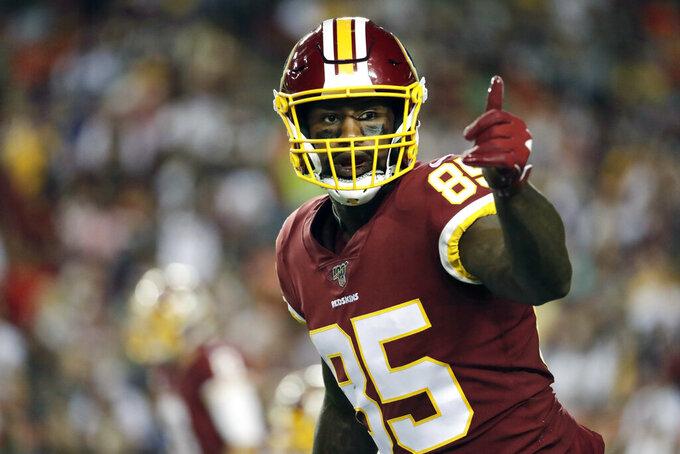 FILE - In this Monday, Sept. 23, 2019 file photo, Washington Redskins tight end Vernon Davis gestures toward a line judge during the first half of an NFL football game against the Chicago Bears in Landover, Md. Vernon Davis has decided to retire after 14 NFL seasons, Monday, Feb. 3, 2020. The 36-year-old says he wanted to walk away from football while his body was still healthy enough for him to pursue business and television opportunities. (AP Photo/Julio Cortez, File)

The 36-year-old said Monday he decided to retire because of the wear and year on his body. Davis said he's walking away from football while his body is still healthy enough to pursue other opportunities.

“I look forward to the next favorite phase of my professional career, which will include opportunities in business and television,” Davis said in a statement. “I will hold football in my heart forever, and I am grateful for the opportunities I’ve had while playing this great game."

A 6-foot-3, 248-pound tight end, Davis stayed in the NFL and remained productive so long in part because of his meticulous physical conditioning. He said during his final pro seasons that he trained year-round like some players do during the season and credited that for staying on the field.

Davis was limited to four games during the 2019 season because of a concussion. Before that, he caught 583 passes for 7,562 yards and 63 touchdowns in 198 regular-season games and had seven touchdowns in 11 playoff games.

San Francisco selected Davis sixth overall in the 2006 draft out of Maryland. He spent more than nine seasons with the 49ers before a midseason trade in 2015 to the Broncos, with whom he won the Super Bowl.

The Washington native signed with his hometown Redskins in 2016 and was with them his final four NFL seasons.

“The journey I’ve had has been nothing short of amazing,” Davis said. “I have taken great pride in the many accolades I have received throughout my career; but most importantly, the relationships I’ve cultivated throughout this time have been an incredible experience for me and my family.”

Davis let word of his retirement leak out during a video with Rob Gronkowski that was posted on Super Bowl Sunday. He confirmed it with a statement posted on Twitter Monday that ended with, “I’m excited for what the future holds.”