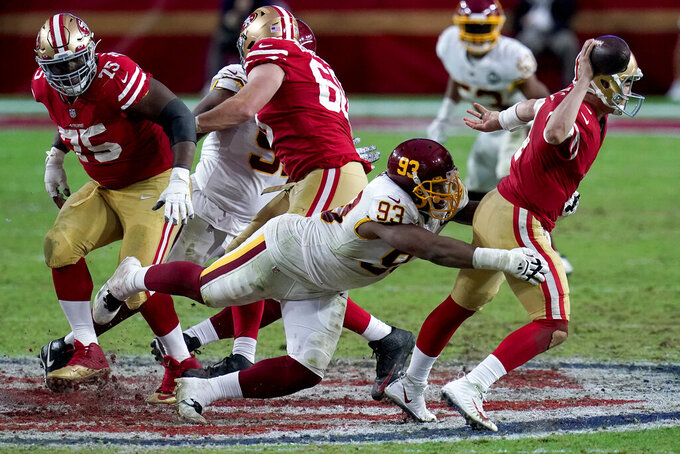 ASHBURN, Va. (AP) — Star defensive tackle Jonathan Allen was held out of Washington's practice Monday because of a tight hamstring.

Allen worked on a side field with trainers while the rest of the team went through the first session of training camp back at Washington's usual practice facility. Coach Ron Rivera says he's day to day. It wasn't clear how Allen injured the hamstring last week when camp ramped up in Richmond, Virginia.

Washington signed Allen to a $72 million, four-year contract extension on the eve of the start of camp. The 26-year-old Alabama product was relieved to get a deal done.

“I’m ecstatic, I’m happy and I’m ready to play some football," Allen said last week, recognizing it was “life-changing” money. "I can just go out there and do what I’ve always done.”

First-round pick Jamin Davis also not take any snaps in team drills because of an eye infection, according to Rivera, who said the team is trying to be careful with the young linebacker.

Allen's ankle injury is keeping him from being in the mix for Washington's starting QB job. When he's 100% healthy, Allen's familiarity with Rivera and offensive coordinator Scott Turner's system could put him in contention with Taylor Heinicke for the No. 2 job.

Heinicke is getting a chance to practice with the first-team offense but has struggled early in camp. The 28-year-old journeyman who impressed in Washington's playoff loss to eventual Super Bowl champion Tampa Bay said he does not see it as a true quarterback competition.

Ryan Fitzpatrick is the presumed Week 1 starter, barring injury or unforeseen circumstances. Fitzpatrick has already taken on a leadership role going into his 17th NFL season.