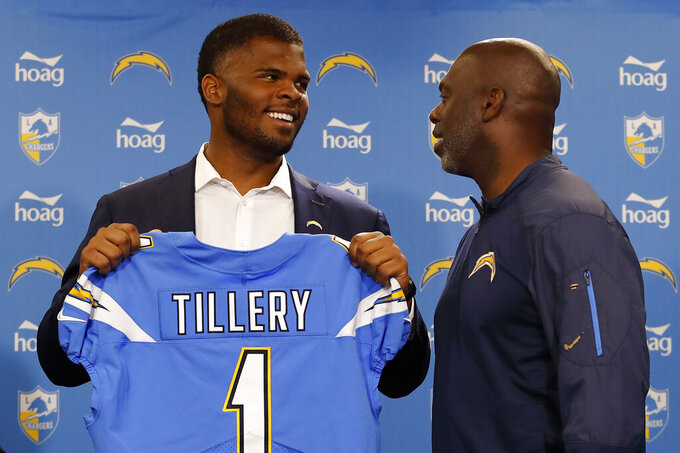 COSTA MESA, Calif. (AP) — Meeting your new boss is always a nervous and stressful situation. It's not any different for NFL first-round draft picks.

Los Angeles Chargers defensive tackle Jerry Tillery had one of those moments during his news conference on Friday. Tillery, who was the 28th overall selection on Thursday, mistakenly referred to coach Anthony Lynn as Lynn Swann.

"I told him, he has to make it up to me," Lynn said. "First of all I'm coach Lynn. You beat Lynn Swann last year."

Swann is the athletic director at USC, which lost to Tillery and Notre Dame the past two seasons. Tillery said the past day has been a little hectic and crazy, but that he was trying to take things in stride.

While most potential draft picks choose to celebrate at home, Tillery had his draft party in Maui. It may also be one of the rare times where a draft pick travelling west to east has been from Hawaii to California.

"I was fortunate enough to have great connections with the place there to help us do that," Tillery said. "It was a beautiful place to celebrate the biggest day of my life. It's just a place that I love. I associate it with happiness."

Lynn said that the 6-foot-7, 305-pound Tillery reminds him of former Denver and Baltimore standout Trevor Pryce because of his size and versatility to play inside, outside and on special teams. Pryce was also the 28th overall selection when he was drafted by the Broncos in 1997.

"He's a big, interior pass rusher with some length," Lynn said. "We love his upside. He had some games this year where he was pretty much unblockable."