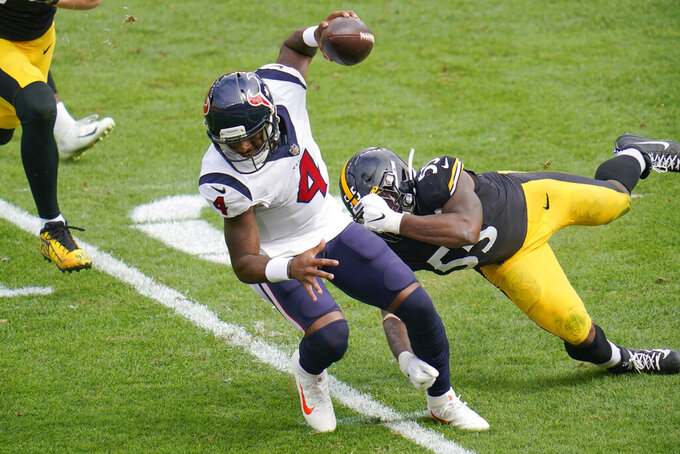 Houston Texans quarterback Deshaun Watson (4) tries to get past Pittsburgh Steelers inside linebacker Devin Bush (55) on a scramble during the first half of an NFL football game, Sunday, Sept. 27, 2020, in Pittsburgh. (AP Photo/Gene J. Puskar)

PITTSBURGH (AP) — Deshaun Watson ran out of running room. J.J. Watt and the defense ran out of stopping power. And the Houston Texans quickly find themselves running of time to get it going in 2020.

A 28-21 loss to the Pittsburgh Steelers on Sunday dropped Houston to 0-3 for the second time in three years. In 2018, the Texans rallied to win 11 of their final 13 to capture the AFC South. The going might be more difficult this time around with first-place Tennessee unbeaten and Houston's defense wilting late.

A week ago, Baltimore pushed the Texans around late to fend off any hopes of a comeback. At an empty Heinz Field, the Steelers put together drives of 79 yards and 62 yards in the fourth quarter. The first one ended with James Conner's 12-yard sprint that gave the Steelers the lead. The second one bled the final 4:47 off the clock.

“I mean, we’ve just given up runs around the edges like it was easy," Watt said. “You can’t do that, you just cannot do that. You’re not going to win football doing what we do in the fourth quarter these last two weeks, giving up all of these runs.”

The Steelers ran for 169 yards on 38 carries, giving them a massive advantage in time of possession. Pittsburgh controlled the ball for nearly 37 minutes. Houston's defense looked spent near the end and the Steelers pounced.

“My linemen were so tired, but so were they,” Pittsburgh quarterback Ben Roethlisberger said. “And we didn’t want to slow down. So I kept telling them, ‘Listen, this is gut check guys. Dig down and see what you got, what can you find,’ and they did it. They kept going.”

And the Texans basically stopped. Coach Bill O'Brien, however, was quick to point out the offense didn't exactly hold up its end either. Houston managed just 51 yards and two first downs in the second half as an early 11-point lead slipped away. The inability to stay on the field on offense and get off the field on defense proved to be too much.

“I think we had a bunch of three-and-outs and the defense were right back out there,” O'Brien said. “Playing the Pittsburgh Steelers, they’re going to wear you down if they possess the ball like that. So, again, we got to play the run better. But I think that as a team we have to play better complementary football.”

Getting something going on the ground would help. The Steelers basically made Houston one-dimensional. The Texans finished with 29 yards rushing on 15 attempts, the longest run of the day a 5-yard carry by David Johnson on Houston's second possession of the game.

For a while, it didn't matter. Watson's ability to buy time in the pocket combined with some communication issues in Pittsburgh's secondary helped the Texans find the end zone three times in the first half, the final one on a pretty 14-yard strike from Watson to Will Fuller with 24 seconds left that put Houston up 21-17 at the break.

The momentum didn't last. The Texans had the ball four times in the second half. Three possessions ended with three-and-outs. The other ended when Watson forced a throw into double coverage early in the fourth quarter. Pittsburgh's Mike Hilton picked it off to set the stage for the game-winning drive.

“We were behind the sticks the whole second half, which makes it a lot tougher,” Watson said. "I think the stat was 17 yards in the third quarter, which is not — you can’t win games like that. So we’ve got to help our defense out and create some yardage and keep them off the field as much as possible.”

Still, Watson and Watt stressed there's no need to panic. The Texans don't play their first divisional game for two more weeks, though ceding any more ground to first-place and unbeaten Tennessee would be unwise.

“You don’t have any choice but to come in and try and improve and get better," Watt said. "I don’t know what the alternative to that would be. If you’re not interested in getting better and finding ways to get better, then you’re probably in the wrong profession because that’s what this job is.”