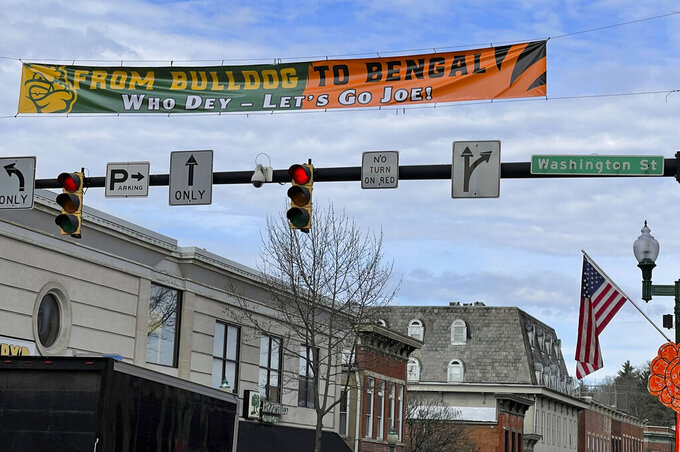 A banner stretched across Court Street in uptown Athens, Ohio, recognizes Joe Burrow's ascension from Athens High School star to Super Bowl quarterback for the Cincinnati Bengals, Wednesday, Feb. 9, 2022. Burrow, who grew up in the nearby village of The Plains, will lead the Bengals against the Los Angeles Rams in the Super Bowl on Sunday. (AP Photo/Mitch Stacy) 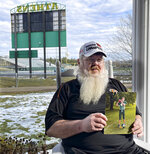 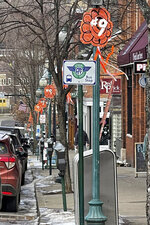 THE PLAINS, Ohio (AP) — Joe Burrow has become something akin to a mythological figure in the weathered southeastern Ohio village where the Super Bowl quarterback spent much of his youth.

In a region with more than its fair share of sorrow from poverty, the opioid epidemic and ongoing pandemic, Burrow has given people something good to claim as their own.

“I think these people are proud that he’s from here, that he carries himself the way he does off the field, as much as they are proud of what he can accomplish on the football field,” said Matt Frazee, a service manager for an auto dealership who on Friday nights in the fall is the radio voice of the Athens High School Bulldogs.

Athens High School is here, but the more picturesque and bustling college town of Athens is nine miles away. About 3,000 people live in The Plains, including Burrow’s parents, Jimmy and Robin.

The community has a couple of stop lights, a few restaurants, scattered businesses and a lot of trailers in one of the poorest areas of the state. Burrow has talked about going to school with kids here who often didn't have enough to eat.

“Let’s set the record straight — he’s from The Plains, Ohio,” said Sam Smathers, who started the youth football program here and was Burrow's first coach. “So when you see it on TV and it says Athens, he is not from Athens.”

Close enough, say the people of Athens and the 20,000 or so students at Ohio University who have claimed a piece of him. Bars and restaurants have renamed menu items after him. There's a Burrow banner stretched across Court Street and signs all over town. Burrow spent plenty of time in Athens, so it's legit.

It's different in The Plains though, more personal.

At the center of it is a feeling that Burrow left but didn't leave the people behind.

Burrow’s poignant mention during his 2019 Heisman Trophy speech of the poverty in the region turned into the Joe Burrow Hunger Relief Fund, which has taken in $1.5 million in two years. Donations are still rolling in.

His face is not ubiquitous on national TV commercials, at least not yet, but last fall he used his name to help publicize a nonprofit program to help train Ohio workers for in-demand jobs.

People here see Burrow projecting the same unassuming cool, polite forthrightness and unshakeable confidence he always did. That he hasn't changed makes him even more appealing: They can still identify with him.

Smathers, the former youth coach, is a 56-year-old retired electrician who now keeps busy driving a shuttle bus for the university. A big, gregarious guy with a graying ZZ Top beard, Smathers has lived across North McDonald Street from the scoreboard at the football field since 1988.

He watched from his porch this week as dozens of cars, many with out-of-state plates, rolled by slowly and went up the hill to the “Joe Burrow Stadium” sign. GiGi's Country Kitchen, a breakfast place on the main drag where Burrow was fond of the Western omelet, is a regular tourist stop.

Bursting with pride that sometimes makes him emotional, Smathers is eating up the media attention this week. Everyone wants to come talk to the coach who first installed Joey as the peewee team's quarterback in the third grade.

“Everybody is seeing what I’ve seen for years — you put Joe Burrow on the team, that's the X factor,” Smathers said.

His garage, known locally as the Dog Pound, once stored football equipment for the youth league. Now it's decorated with Burrow photos and memorabilia and serves as a gathering place for anybody who wants to talk football, watch games, or even review footage of Joey tossing TD passes as a sixth grader. Burrow himself headed to the Dog Pound to hang out when he was in town before the season.

That's where Smathers will be watching Burrow and the Bengals face the Los Angeles Rams in the Super Bowl on Sunday night.

Burrow grew up here because this is where his parents bought a house when Jimmy Burrow was hired away from North Dakota State by coach Frank Solich in 2005 to be defensive coordinator for the Ohio Bobcats. It was a reunion for the two coaches with deep Nebraska ties.

A lot of people are very glad he did.

Kevin Wiseman is the sports editor of The Athens Messenger and covered Burrow's high school career. He thinks Burrow's skyrocketing notoriety has been a galvanizing force for good that has nothing to do with whether the Bengals win the Super Bowl.

“I know Joe always talks a lot about how he’s thankful for the people from southeast Ohio," Wiseman said, “but sometimes I’m not sure he understands -- or he even could -- how much people appreciate him here and how much he’s loved.”