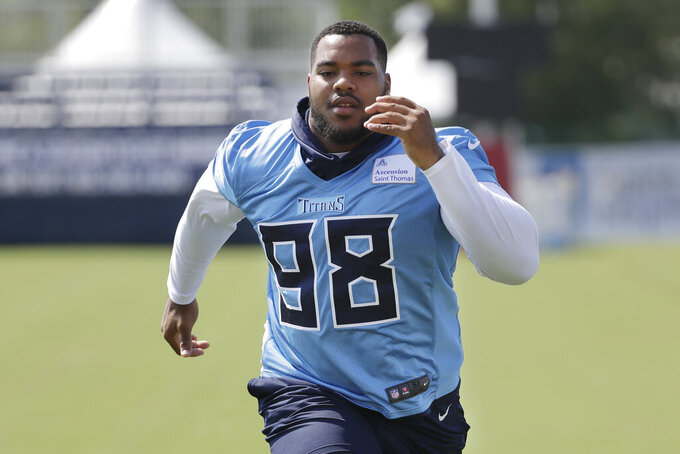 FILE- In this July 29, 2019, file photo, Tennessee Titans defensive lineman and top draft pick Jeffery Simmons runs during NFL football training camp in Nashville, Tenn. The defensive tackle out of Mississippi State tore his ACL in February but has begun practicing with the Titans even as he remains on the non-football injury list. The Titans are using the workouts to see if he is recovered enough to play, possibly against the Los Angeles Chargers on Sunday. (AP Photo/Mark Humphrey)

The team moved him from the non-football injury list to the 53-man roster Saturday. The Titans also promoted outside linebacker Derick Roberson to the active roster from the practice squad. To clear space, the Titans waived defensive linemen Brent Urban and Matt Dickerson.

Tennessee made the 6-foot-4 Simmons its top pick after the defensive tackle from Mississippi State fell from a projected top 10 selection to 19. He tore his left ACL in February and was expected to miss the 2019 season. But Simmons recovered quickly and started practicing with the Titans (2-4) on Wednesday.

Roberson, who started his college career at Texas, is an undrafted free agent who had 23 sacks in 32 games at Sam Houston State.