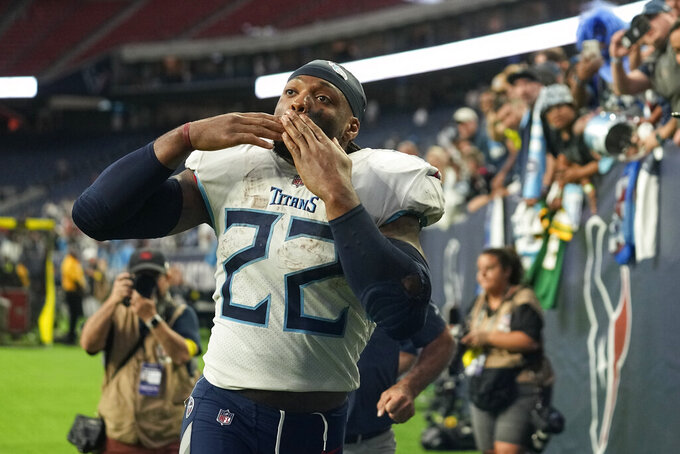 Tennessee Titans running back Derrick Henry blows kisses to the fans after the Titans beat the Houston Texans in an NFL football game Sunday, Oct. 30, 2022, in Houston. (AP Photo/Eric Gay)

NASHVILLE, Tenn. (AP) — The Tennessee Titans have two-time rushing champ Derrick Henry and a punishing defense, so the two-time AFC South division winners are leaning into their strengths right now.

Ryan Tannehill snapped his start streak because of a sprained right ankle and illness.

The Titans (5-2) went ahead and won their fifth straight by putting the ball in Henry's hands as much as possible and leaning on a defense that has been among the NFL' s stingiest after an 0-2 start.

“There’s a physical style of brand that we want to play with,” coach Mike Vrabel said Monday.

Vrabel made clear the Titans will do whatever it takes week to week. Right now, Henry is the key to the Tennessee offense with four straight 100-yard games, and he had a season-high 219 yards in a 17-10 win in Houston. Only the Giants’ Saquon Barkley has 24 more yards rushing having played eight games already.

Henry also ranks third with seven touchdowns and became the Titans’ franchise TD leader with his two against the Texans. That pushed him past Eddie George, who started his career when this franchise called Houston home as the Oilers.

Tennessee takes this winning streak to Kansas City (5-2) for a prime-time game Sunday night with the Chiefs.

That defense. Despite losing Pro Bowl linebacker Harold Landry III to a torn ACL just before the season, the Titans have held three opponents under 50 yards rushing and now rank second entering Monday in allowing just 89.2 yards per game.

They also are the league's best on third down, limiting opponents to 25.5% conversions entering Monday.

Now they rank 10th in fewest points allowed entering Monday. The Titans simply dominated Houston, allowing 161 yards only because of a late 90-yard drive with the game decided.

The passing game. With Ryan Tannehill sidelined by both a sprained right ankle and an illness, the Titans completed only two passes to a wide receiver. Veteran Robert Woods led the Titans with 26 yards receiving on his two catches.

The Titans currently have three wide receivers on injured reserve in Racey McMath, Treylon Burks and Kyle Philips. Burks, the first-round pick at No. 18 overall, isn't eligible to return at the earliest until after Tennessee's trip to Kansas City.

But Nate Davis returned at right guard in Houston after missing two games. The Titans line opened some big holes for Henry against the NFL's worst run defense.

QB Malik Willis. The rookie had some people thinking he could push Tannehill for the starting job by 2023. Willis's best stat was winning his first NFL start. He was 6 of 10 for 55 yards, intercepted once and sacked three times. Willis showed how much he still has left to learn after finishing his college career at Liberty.

Both Tannehill's ankle and the illness that kept him in Nashville over the weekend should be feeling better. But Vrabel declined to update Tannehill's status, referring to the injury report that will come out Wednesday. Starting safety Amani Hooker hurt his left shoulder and couldn’t finish against Houston.

It's the longest such streak in franchise history, easily topping the three straight seasons between 1978 and 1980 with Earl Campbell and the 1991-1993 Oilers with Warren Moon.

Pack up for the road once again for the fifth time this season. If the Titans can find a way to win in Kansas City, then it's back to Music City for five of the final nine games.