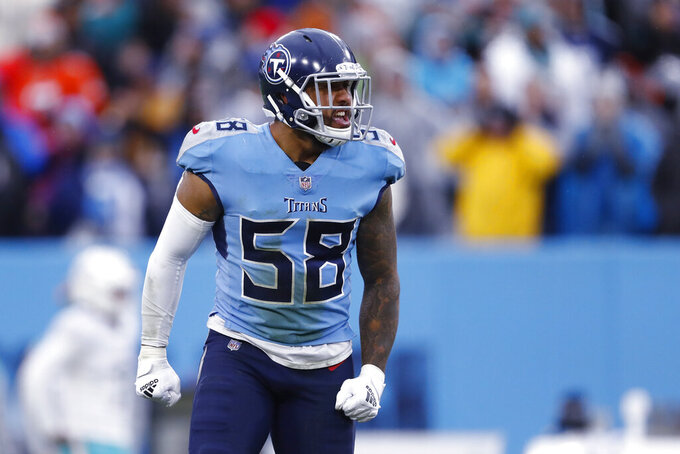 FILE - Tennessee Titans linebacker Harold Landry III plays against the Miami Dolphins during the second half of an NFL football game Jan. 2, 2022, in Nashville, Tenn. The Titans announced Tuesday night, March 8, they had agreed to terms on an extension for Pro Bowl linebacker Landry hours after declining to use the franchise tag. Terms were not announced. (AP Photo/Wade Payne, File)

NASHVILLE, Tenn. (AP) — The Tennessee Titans finally have a strong pass rush they're going to keep together.

The Titans announced Tuesday night they had agreed to terms on an extension for Pro Bowl linebacker Harold Landry III hours after declining to use the franchise tag. Terms were not announced.

Landry reportedly agreed to a five-year extension worth $87.5 million with $52.5 million guaranteed.

The deal keeps him off the free-agent market after he posted a career-high 12 sacks to rank 10th in the NFL and earn his first Pro Bowl nod. He had a team-high 14 tackles for loss, was second with a career-high 49 quarterback pressures and tied for second with 75 tackles. He has 4 1/2 postseason sacks for his career.

Landry has started 52 straight games, the sixth-longest streak among NFL defensive players, and played in 64 consecutive games since sitting out the first game of his rookie season.

He joined Cameron Hayward of Pittsburgh as the only players in the NFL with at least 250 tackles, 30 sacks and two interceptions over the past four seasons. He joined Micah Parsons, Aaron Donald and Heyward as the only NFL players with at least 75 tackles and 10 sacks in 2021.

The Titans took Landry in the second round in 2018 at No. 41 overall out of Boston College.

Tennessee's defense ranked ninth with 43 sacks and was the NFL’s only unit featuring three players with at least eight sacks in 2021. Denico Autry had nine sacks and Pro Bowl lineman Jeffery Simmons had a career-high 8 1/2.

The Titans had just 19 sacks in 2020 after trying Jadeveon Clowney and Vic Beasley as free agent help. Clowney finished that season on injured reserve, while Beasley was released with zero sacks combined between the pair.

The Titans signed Autry and linebacker Bud Dupree as free agents last March with Autry proving to be a steal matching his career-high in sacks. Autry is under contract through 2023, while Dupree has four more seasons remaining.

Titans general manager Jon Robinson said at the NFL combine last week it was fun to watch how the pass rush came together.

“But it is a balance of trying to keep that thing together, and working through Harold’s contract and you know being mindful of players that we kind of have coming down the pike too that we want to try to keep there as well,” Robinson said.

Simmons is going into his fourth season, but the Titans can pick up the fifth-year option for the No. 19 overall pick in 2019 this spring. Simmons also earned his first Pro Bowl nod.