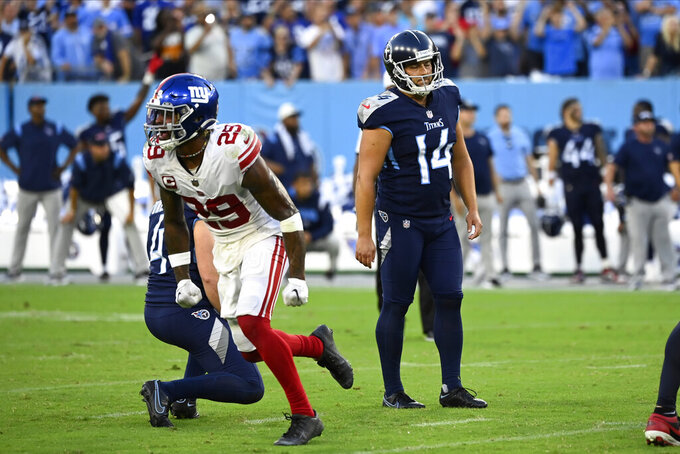 Tennessee Titans place kicker Randy Bullock (14) reacts after missing a field goal during the second half of an NFL football game against the New York Giants Sunday, Sept. 11, 2022, in Nashville. The Giants defeated the Titans 21-20. (AP Photo/Mark Zaleski)

NASHVILLE, Tenn. (AP) — Tennessee's opening schedule looked daunting from the moment the NFL released a slate sending the Titans on the road for five of their first eight games.

Dropping their season opener at home?

That makes the Monday night game in Buffalo up next even more daunting and the possibility of an 0-2 hole quite real for the AFC’s No. 1 seed last season. Titans coach Mike Vrabel said the challenge remains the same whether coming off a win or loss.

“You have to regroup, figure out what you did good, what you did bad and try to eliminate the things that get you beat," Vrabel said Monday. "And that's what we're going to do.”

The Titans had their chance to win as time expired only to see Randy Bullock's 47-yard field-goal attempt miss wide left in a 21-20 loss to the New York Giants. They had 1:06 left and took the final timeout after rookie Kyle Philips' 21-yard catch got them to the Giants 27.

Tennessee was in this same situation a year ago only worse. The Titans were routed 38-13 by Arizona, then hit the road for three of their next four games. They went 3-1 in that span on their way to a 12-5 record and the AFC's No. 1 seed.

The Titans do get a bit of a break from the road-heavy start to their season. Their bye is Oct. 16.

“You’ve got to have a short memory on what happened, but make the corrections, be better and improve,” Henry said.

Tannehill was sacked only once, and he threw for 266 yards with two touchdowns and a 106.4 passer rating.

But a unit that ranked second in the NFL last season in allowing only 84.6 yards rushing per game gave up almost that much on one run by Saquon Barkley, who finished with 164 yards. The Titans gave up 238 yards rushing total after allowing more than 100 yards rushing twice all of last season.

Ryan Stonehouse. The undrafted rookie punter from Colorado State punted six times with a long of 66 yards and an overall average of 57 yards. Better yet, his net average was 46.7 yards, and three of his punts were downed inside the 10.

Caleb Farley was a question mark when the Titans made him their first-round pick in 2021 despite being the first player to opt out of the 2020 college season because of the pandemic, then he had a second back surgery in 2021.

Now the 22nd pick overall has been passed over not just as a starter by a rookie, Roger McCreary, the 35th pick overall, started and played 57 snaps. Farley played only 15 snaps.

Safety A.J. Moore, a key special teams player, left the game in the first half with an injured ankle.

15-6. The Titans came into this season leading the NFL since Vrabel took over as head coach in games decided by three points or fewer, and they were both a league-best and franchise-record 6-1 in such games last season. Around the rest of the NFL, 27 other teams had no more than three such wins of three points or fewer.

The Titans are at their best when counted out, and few expect them to go to Buffalo and pull out a win.

Plus, they are the two-time defending champs of the AFC's only division to go winless in Week 1 even with two teams playing each other.