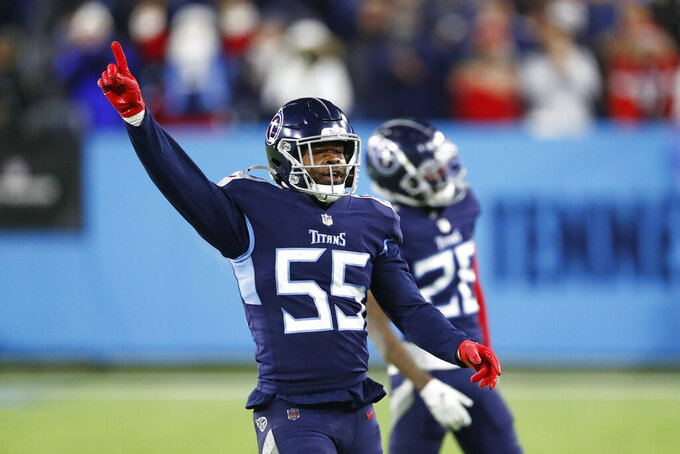 NASHVILLE, Tenn. (AP) — The Tennessee Titans are back at work rested from a weekend off with the math for their second straight AFC South title very simple.

Beat the Miami Dolphins on Sunday and avoid going to Houston for the regular-season finale needing to beat the Texans for a third straight season. Not that anything will change from how the Titans prepare with Monday giving them an extra day to prepare.

“I would say it is pretty much the same scenario as we have always tried to talk about around here and just focusing on this week,” Titans coach Mike Vrabel said. “Focusing on how we can improve. Use these couple of extra days to get healthy and do a little bit of work today, to condition and work out and to meet.”

The Titans (10-5) had some mixed results Monday with the latest round of COVID-19 testing.

The Titans have won two of three since their bye and now hope to benefit from the mini-break following their 20-17 win over San Francisco on Dec. 23. They currently hold the No. 2 seed in the AFC where only Kansas City (11-4) has a playoff berth clinched.

A team that has used 88 players this season, most in a non-strike season, has gotten at least one player back from injured reserve prior to each of the past three games. First, it was Jones against the Jaguars followed by Dupree against Pittsburgh and most recently receiver A.J. Brown hours before the win over the Niners.

Brown came through with 145 yards on a career-high 11 catches in a much-needed win with Tennessee's margin in the AFC South decreasing over Indianapolis (9-6).

Currently, six of the 13 Titans on injured reserve are eligible to return. That includes Derrick Henry, the NFL's rushing leader the past two seasons who was leading the league in that category when he broke his right foot Oct. 31. Vrabel refused to tip whether Henry, or anyone else, might be allowed to start practicing this week.

That's not stopping others from hoping and speculating what might happen as the Titans hope they can prepare for the postseason.

“As soon as we get everybody back healthy, get the King (Henry) back, we do what we do,” Brown said after their win over the Niners.