Titans banged up, resilient, ready to build off 34-31 win 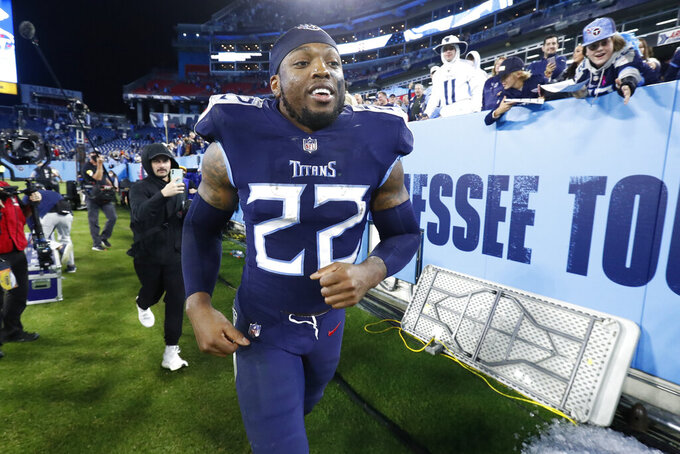 NASHVILLE, Tenn. (AP) — The Tennessee Titans just passed their biggest test this season even with an injury report that grows with each passing game.

Call it poise, resiliency or the old cliche of next man up, it certainly helps having the NFL's best rusher in Derrick Henry and a defense with a growing knack for goal-line stands.

The Titans (4-2) have won two straight, and their 34-31 win over the Buffalo Bills on Monday night before a record home crowd on national television. They scored 10 points in the final 15 minutes for their 13th comeback win in the fourth quarter or overtime since 2018, most in the NFL in that span.

“We’re not always the prettiest squad, the most glamorous squad, but we believe in each other, we play tough, gritty football, and we love to win,” quarterback Ryan Tannehill said. “We’re going to try to find a way to do that each and every week.”

But it was costly ahead of a visit from Kansas City (3-3) on Sunday.

“It is going to be a long process and I am confident that he will be back better and strong, but it is unfortunate,” coach Mike Vrabel said of Farley, their top draft pick.

The run game, aka Henry. Henry leads the NFL with 783 yards rushing — 260 yards more than the next closest running back. He also has 10 touchdowns — five more than any other NFL running back. He ran for 143 yards against a Buffalo defense that came in third in the league in giving up 78.4 yards a game.

Henry tied Barry Sanders and Shaun Alexander with his sixth game of at least 125 yards rushing and three or more TD runs. Only Jim Brown (nine) has had more. Henry also joined Eric Dickerson (787 yards in 1983) as the only NFL players since 1960 with 750 yards rushing and 10 TD runs in the first six games of a season.

The passing game. Julio Jones made an amazing catch, then aggravated a hamstring injury again. A.J. Brown had his best game this season, catching seven of the nine passes thrown to him for 91 yards, all in the second half. It was an impressive performance considering Brown was dehydrated from a bout of food poisoning.

But the Titans rank 27th in the NFL, averaging 220.5 yards passing, and Ryan Tannehill has had one 300-yard passing game this season. An improved passing game will ease the burden on Henry while creating more holes for the NFL rushing leader.

Harold Landry. The Titans linebacker had a second straight game with two sacks, and he's tied for third in the NFL with 6 1/2 sacks this season. He's third with 32 pressures and tied for fifth with seven tackles for loss. He's having his best season in a contract year and giving much-needed help to a battered secondary.

Janoris Jenkins. The veteran cornerback was signed to be an anchor for a secondary featuring a handful of first and second-year players. Jenkins keeps giving up too many plays and appeared to get crossed up on coverage on one of the Bills' touchdown passes.

It might be easier to list the healthy Titans at this point. Six Titans had injuries or aggravated issues against the Bills with left tackle Taylor Lewan carted off the field and evaluated for a concussion. Vrabel said Lewan likely will be in the concussion protocol.

But three-time Pro Bowl punter Brett Kern should be back from a groin injury and a stint on the reserve/COVID-19 list. The Titans waived punter Johnny Townsend on Tuesday.

0. The number of times Tannehill was sacked by the Bills, the first time this season he made it through a game without being taken down even once. That's a big improvement considering Tannehill had been sacked an NFL-high 20 times through the first five games.

See who's healthy enough to play against the Chiefs. The Titans can try to build more momentum before hitting the road for back-to-back games starting at Indianapolis and then the Los Angeles Rams.