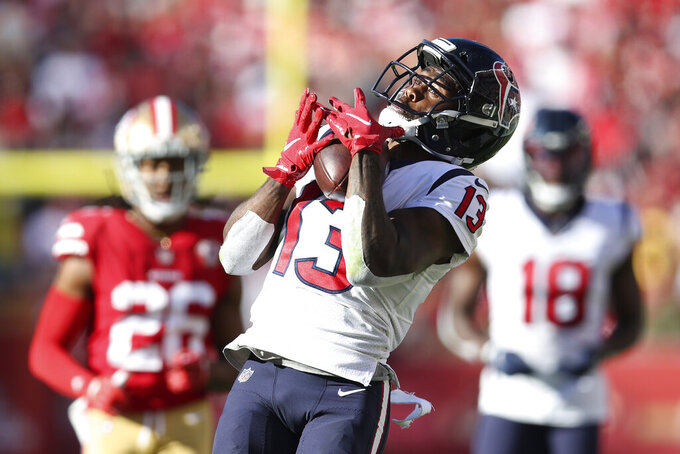 OPENING LINE: Titans by 10 1/2, according to FanDuel SportsBook.

TURNOVER DIFFERENTIAL: Titans minus-3; Texans plus-3.

TITANS PLAYER TO WATCH: RB D’Onta Foreman. Drafted out of Texas in the third round in 2017 by Houston, Foreman has blossomed as a substitute for Derrick Henry and is coming off a career-high 132 yards rushing with one touchdown, helping the Titans clinch their second straight AFC South title. That was his third 100-yard performance in five games, and he ranks fifth in the NFL over that span with 413 yards rushing. Foreman is averaging 4.4 yards per carry. He's a big reason the Titans have the NFL’s No. 3 rushing offense. Even if Henry rejoins the active roster and plays, Foreman still will get plenty of carries.

TEXANS PLAYER TO WATCH: WR Brandin Cooks had 66 yards receiving Sunday to give him 1,011 for his sixth 1,000-yard season. Cooks joins Andre Johnson and DeAndre Hopkins as the only players in franchise history to have consecutive 1,000-yard receiving seasons after he had 1,150 yards last season. Cooks has had four 100-yard receiving games this season, including in two of his last three games.

KEY MATCHUP: The Titans' defense has allowed 39 points combined over the last four games. The Titans are tied for ninth with 41 sacks, more than double what they managed all last season. The Texans have allowed 42 sacks, struggling to protect the quarterback no matter if Tyrod Taylor or Davis Mills is under center.

KEY INJURIES: Henry, who broke his foot Oct. 31, returned to practice Wednesday, but it’s unclear if he’ll be activated for Sunday’s game. ... WR Julio Jones was activated from the reserve/COVID-19 list on Monday, but his status for the game is in question after being limited in practice with a hamstring injury. ... Houston S Jonathan Owens (wrist) and DB Grayland Arnold (ankle) were placed on injured reserve Monday. ... S Justin Reid was placed on the COVID-19 list Monday, but coach David Culley said there’s a chance he could play Sunday.

SERIES NOTES: The Titans clinched their last two playoff berths with victories in Houston to end the regular season. Now they need another win in Houston to secure the AFC’s No. 1 seed with a first-round bye and home-field advantage. ... Houston’s win in November snapped a three-game skid in the series. ... The Texans haven’t beaten the Titans at home since a 34-17 win on Nov. 26, 2018.

STATS AND STUFF: The Titans have had the AFC’s No. 1 seed twice (2000 and 2008) since leaving Texas in 1997. ... This streak of three straight playoff berths is the longest for the Titans since a seven-season stretch between 1987-1993 as the Houston Oilers. ... The Titans are 9-2 in the AFC South since 2020, tied for the NFL’s second-best divisional mark in that span. ... The Titans have won three of four since their bye. ... Tennesssee is sixth in the NFL allowing 20.6 points a game and second allowing 85.9 yards rushing per game. ... Titans QB Ryan Tannehill needs 53 yards to join Warren Moon (1989-1991) as the only quarterbacks in franchise history with multiple seasons with at least 3,500 yards passing. ... Tannehill has at least one TD pass or run in a career-best 14 straight games. ... Titans DE Denico Autry has had a sack in four straight games and has tied his career high with nine sacks this season. ... Tennessee OLB Harold Landry III has a career-high 12 sacks, the most by a Titan since Jason Babin had 12 ½ in 2010. ... The Texans tied a franchise record with four interceptions in the win over the Titans in November. ... Mills has nine touchdown passes with just one interception in six home games this season. He needs 229 yards passing Sunday to pass David Carr (2,592) for most by a rookie in franchise history. ... RB Rex Burkhead had 47 yards rushing and a season-high 32 yards receiving last week. ... WR Chris Conley has at least four catches in three of his last four games against the Titans. ... Rookie TE Brevin Jordan has a TD catch in three of his five home games. ... CB Desmond King had seven tackles and his third interception of the season last week. Two of his interceptions came in the first meeting with Tennessee. ... LB Christian Kirksey led the team with nine tackles last week. He has at least seven tackles in three of his last four games. ... DE Jordan Jenkins had a sack vs. San Francisco.