Titans can secure AFC's top seed with win over Texans 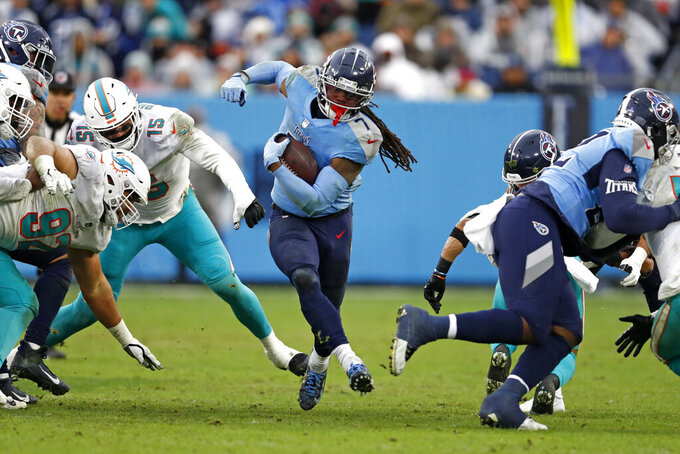 Tennessee Titans running back D'Onta Foreman (7) carries the ball against the Miami Dolphins in the second half of an NFL football game Sunday, Jan. 2, 2022, in Nashville, Tenn. (AP Photo/Wade Payne)

HOUSTON (AP) — Having clinched their second straight AFC South title last week, the Tennessee Titans need only a win over the lowly Houston Texans on Sunday to secure the top seed in the AFC playoffs and a coveted first-round bye.

“I want a bye week next week,” Tennessee Pro Bowl safety Kevin Byard said. “That’s the motivation to go in there and try to play our best game so we can get that bye week ... and ... the playoffs, the AFC can kind of come through Nashville.”

And despite the struggles of the Texans (4-12) this season, the Titans know better than to underestimate them after what happened in this season’s first meeting. Houston got a 22-13 upset in Nashville on a rainy day where Ryan Tannehill threw a career-high four interceptions.

“The way we played against them the first time ... we got our (butts) kicked,” left tackle Taylor Lewan said. “So, we need to go play a good football team that has a solid culture in the way that they’re out of the playoffs, this is the last game of their season, but they still play so hard.”

The Texans have improved in recent weeks and two of their four wins have come in the last three games, including a 41-29 victory over a Los Angeles Chargers team still in playoff contention.

“Each game counts. It doesn’t matter what the record says or anything,” Houston defensive lineman Ross Blacklock said. “You can have an impact on this team, an impact on somebody else’s team, ruin the playoffs or whatever the case may be. At the end of the day, we are just here to get a win.”

Tennessee comes in second in the NFL against the run, and defensive tackle Jeffery Simmons said, yes, the Titans want to try to finish first in the league in that category.

The Titans are allowing 85.9 yards rushing per game, less than a yard behind the 84.8 yards rushing allowed by league leader Baltimore. The Titans have allowed one 100-yard rusher all season, back on Oct. 10 when Jacksonville’s James Robinson ran for 149 yards in a loss to Tennessee.

“We take a lot of pride in stopping the run,” Simmons said.

They should have a good chance to reach their goal facing a team that ranks last in the NFL by averaging just 84.9 yards rushing a game. The Texans ran for a season-high 189 yards against the Chargers on Dec. 26, but were unable to build on that big game last week when the 49ers limited them to just 86 yards rushing.

Houston’s Davis Mills needs 229 yards passing to eclipse David Carr (2,592) for the most yards passing by a rookie in franchise history. Carr set the mark in the team’s inaugural season in 2002 when the first overall pick started all 16 games.

Mills has appeared in 12 games with 10 starts after opening the season as Tyrod Taylor’s backup. The third-round pick from Stanford has thrown 13 touchdown passes with 10 interceptions.

While Carr was drafted to be the team’s franchise quarterback, Mills was thrown into the starting role unexpectedly after an injury to Taylor in Week 2.

“I didn’t know I was going to get this opportunity this early in my career, but I’m extremely grateful for it and I’m grateful for ... the whole team here to put their confidence in me and support me,” he said. “I’m ready to go out there and give them my all each week.”

The Titans have the option of adding Derrick Henry back to the roster before kickoff.

The NFL’s rushing leader the last two seasons has a combined 461 yards rushing and five TDs in his last two games in Houston. Henry’s career-best performance in last year’s regular-season finale made him the eighth player to run for at least 2,000 yards. But this game will be played on an artificial surface, and Henry just started testing his surgically repaired right foot Wednesday after being designated to return to practice.

D’Onta Foreman gives the Titans plenty of reason to let Henry stay on injured reserve until the postseason. Foreman ran for a career-high 132 yards in last week’s win over Miami, and he has three 100-yard performances in five games. Foreman ran only seven times for 25 yards in the first game between these teams this season. But the running back who played at the Houston suburb of Texas City in high school expects to have plenty of family watching his first game with the Titans in Houston against the team that drafted him in the third round in 2017 out of Texas.

Tannehill’s four-interception game against Houston on Nov. 21 was one to forget.

He threw for 323 yards that day, but former Titans cornerback Desmond King picked him off twice. Tannehill has been intercepted only twice over the past five games, and he believes he and the team will be much better against Houston this time around.

“Definitely things we have to clean up and I think we have cleaned up since that game,” Tannehill said. “Excited to go out and play good football for four quarters and show what we can do.”