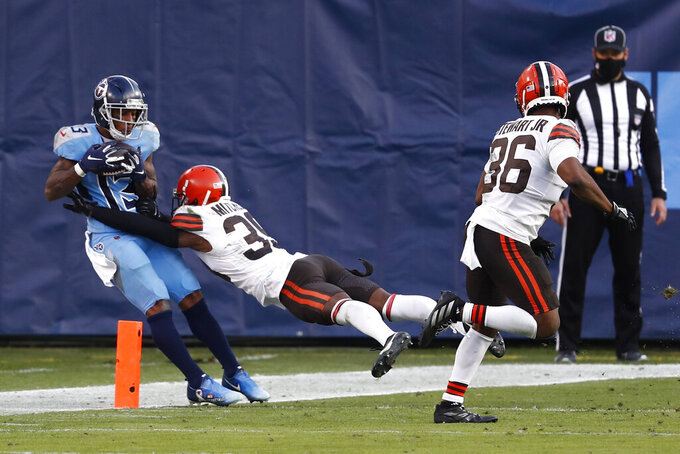 NASHVILLE, Tenn. (AP) — The Tennessee Titans proved they don't quit no matter how far behind they are.

Fixing the issues that resulted in their biggest halftime deficit of the season are crucial if Tennessee wants to win the AFC South for the first time since 2008.

The Titans started so slowly they fell behind 38-7 at halftime Sunday, and scoring four touchdowns in the second half just wasn't enough in a 41-35 loss to the Cleveland Browns.

“It’s tough when you spot 30 points and you’re playing from behind, especially in this league,” running back Derrick Henry said. “It’s hard to win when that margin is that large.”

The Titans (8-4) snapped a two-game winning streak that had put them back atop the the AFC South. Now they're tied with Indianapolis, though Tennessee has the divisional tiebreaker.

The Titans drove to the Browns 42 when things turned. Ryan Tannehill threw incomplete on third-and-1 to backup offensive lineman Aaron Brewer. Henry was marked down shy of the marker on fourth-and-1, though it appeared he had picked up the first down. Coach Mike Vrabel lost his challenge of the spot.

“I hold myself to a high standard and should have got that first down,” Henry said. “Left it in their hands to spot the ball, to make it short.”

The Browns, starting at their own 41, drove for their first touchdown.

On the first play of the Titans' next drive, the NFL's rushing leader coming into the game was stopped for a 3-yard loss and stripped of the ball. It was Henry's first fumble of the season and only the sixth turnover of the year for Tennessee, which came in as the best team in the league in that category.

A Tennessee offense that came in fifth in points and eighth in total yards also went three-and-out twice after that fumble. The Titans coughed it up again.

Wide receiver Corey Davis, who had a career day with 11 catches for 182 yards and a touchdown, said the issue was too many self-inflicted wounds.

Baker Mayfield threw for 290 yards and four TDs in the first half alone as Cleveland held the ball for more than 21 minutes. The Titans also had four of their five penalties in the opening half.

“Bad communication, bad execution,” safety Kevin Byard said. “You go out there and play like that, you (get) your behind whipped.”

Henry said the Titans gave themselves a chance in the second half.

“Nobody gave up. We kept fighting. Just came up short,” Henry said. “But I just know I have to be better. I pride myself being a leader on this team, and definitely this one stung. Felt like I didn’t do my job the way I needed to. Have to be better, tremendously.”

The Titans outscored the Browns 28-3 after halftime, starting with back-to-back touchdowns within the first six minutes of the third quarter. Down 41-21 late in the third, Ryan Tannehill's pass went off Adam Humphries to M.J. Stewart for an interception at the Browns 9.

“The interception kind of put a halt to the momentum that we had building there in the second half and really just cost us just the time and the not being able to score,” Vrabel said. “Everything has got to be perfect. Everything would’ve had to have been right. It rarely ever is in football and in life.”