Titans CB Fulton, RB Hilliard out for Week 2 vs. Bills 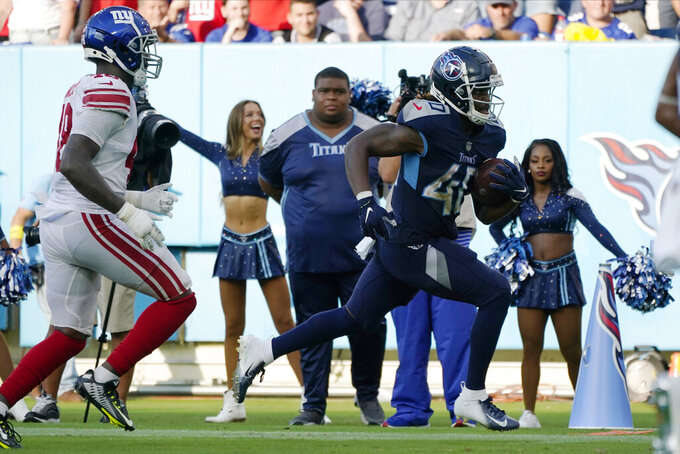 Tennessee Titans running back Dontrell Hilliard (40) runs to the end zone for a touchdown after making a catch during the second half of an NFL football game againt the New York Giants Sunday, Sept. 11, 2022, in Nashville. (AP Photo/Mark Humphrey)

Neither player practiced all week. Reserve guard Jamarco Jones also was ruled out after missing practice Friday and Saturday because of an elbow injury.

Fulton allowed a 65-yard touchdown pass last week in the season-opening loss to the New York Giants. With Fulton out, the Titans are likely to start 2021 first-round draft pick Caleb Farley, who played just 16 defensive snaps in Tennessee’s dime package last week. Farley is coming off a torn ACL suffered against the Bills in a Monday night game last season at Nissan Stadium.

“It’s always a huge challenge every week, no matter who’s in there,” Titans coach Mike Vrabel said. “This is a difficult league, and you have to try to earn everything and see if you can get off the field and make them punt.”

“I want to make the most of it. I always get those emotions and feelings going into any game, since Little League," he said. “I just want to go out on the field and make the most of the opportunity I’ve been given.”