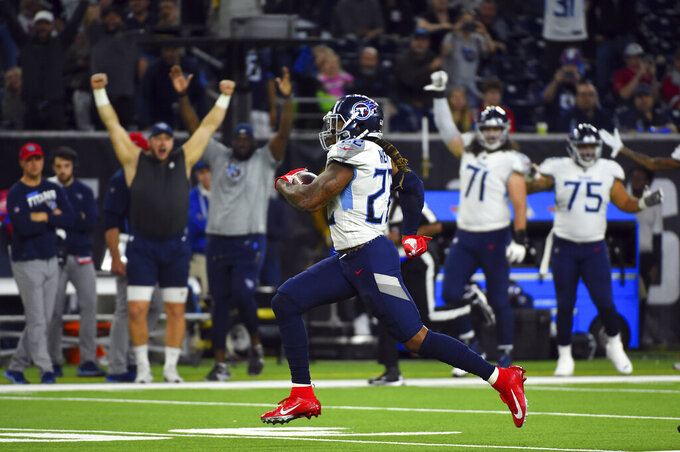 HOUSTON (AP) — Mike Vrabel's playoff debut as a head coach will come against the team he helped to three Super Bowl titles as player.

But don't expect the gruff second-year coach of the Tennessee Titans to reminisce about his time with the New England Patriots as next weekend's game approaches.

“I’m not emotional,” Vrabel said. “I just know what's ahead and ... it’s about being focused on the Patriots and how I get these guys prepared to go on the road. You’re basically walking into the viper’s den.”

The Titans secured their playoff spot with a 35-14 victory on Sunday over the Houston Texans, who had already bested Tennessee for the AFC South crown and had nothing to play for. Derrick Henry rushed for a season-high 211 yards and three touchdowns for the Titans (9-7), who will now prepare for their intriguing first-round matchup with New England.

The Texans (10-6), who rested quarterback Deshaun Watson and other key players, were locked into the AFC's fourth seed when Kansas City won earlier Sunday. Houston will host the Buffalo Bills next weekend.

Ryan Tannehill threw for 198 yards and two touchdowns for Tennessee and will make his playoff debut in his eighth NFL season. Rookie A.J. Brown had 124 yards receiving and a touchdown.

Watson was active on Sunday, but coach Bill O'Brien started AJ McCarron instead. Watson was listed as questionable with a back injury this week but said he was OK. Receiver DeAndre Hopkins was also active but did not play, and several starters, including receiver Kenny Stills, left tackle Laremy Tunsil and nose tackle D.J. Reader, were inactive.

“Once we were getting closer to the beginning of the game, it was pretty obvious that our seeding wasn't going to change,” coach Bill O'Brien said. “So we decided to do those things in the best interest of the team.”

McCarron threw for 225 yards with an interception and ran for a touchdown.

Tennessee was up by seven at halftime and extended the lead when Henry scored on a 3-yard run with 10:06 left in the third quarter. Henry returned after sitting out last week with a hamstring injury.

Houston then used almost nine minutes on a 16-play drive that ended with a 1-yard touchdown run by McCarron. He evaded the rush and dived into the end zone for the score that cut the lead to 21-14.

Tennessee made it 28-14 when Henry scored on a 1-yard run early in the fourth quarter. That touchdown was set up when Brown grabbed a nifty 47-yard reception between two defenders just before falling out of bounds.

The Titans padded the lead when Henry rumbled 53 yards for a touchdown with 2:54 left. He finished the season with a career-high 1,540 yards rushing, which leads the NFL, and 16 touchdowns — tied with Green Bay's Aaron Jones for the league lead.

“Coach gave us a great statistic before this game about how teams that won in the playoffs ran the ball effectively, and the teams that didn’t, didn’t win,” Henry said.

The Texans scored a touchdown on their opening drive for the first time all season when Duke Johnson's 1-yard run made it 7-0. The Titans tied it when Tannehill threw a 51-yard touchdown pass to Brown on their next drive.

Tennessee took a 14-7 lead when MyCole Pruitt capped a 16-play, 90-yard drive with a 1-yard touchdown reception in the second quarter.

Texans CB Johnathan Joseph injured a hamstring in the first half and didn't return, but said after the game that he is OK and expects to play next week.

Henry is the first Titan to lead the NFL in rushing since Chris Johnson had 2,006 yards in 2009. Henry, who won the Heisman Trophy in 2015, is the first Heisman winner to win the NFL's rushing title since Ricky Williams did it in 2002.

The Titans were aware that Henry was inching closer to passing Cleveland's Nick Chubb for the title during Sunday's game, and Vrabel told him he was giving him two more carries to try and get it.

“And he ended up just needing the one," Vrabel said.

Added Henry: “When he said that, I knew I had to make something happen.”

Tannehill on the Titans turning around the season after starting 2-4: “We've got a bunch of fighters, a bunch of guys that believe in each other ... through the ups and the downs we just kept trying to get better each and every week.”

Both teams prepare for the opening round of the playoffs, with Tennessee visiting New England and Houston hosting Buffalo.