Titans coach deciding whether to bench Mariota for Tannehill 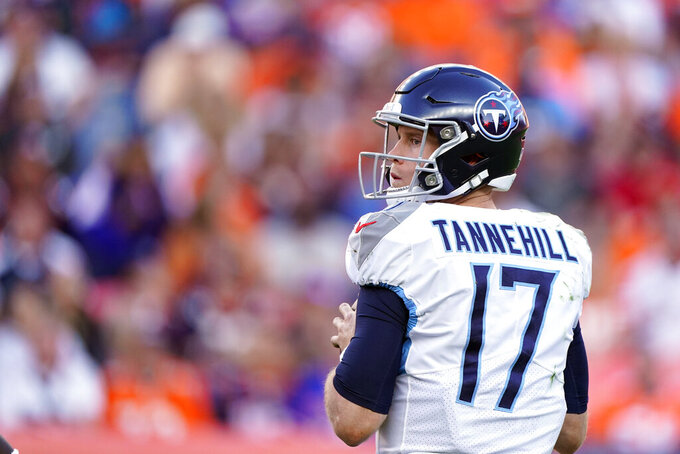 Tennessee Titans quarterback Ryan Tannehill looks to throw a pass during the second half of an NFL football game against the Denver Broncos, Sunday, Oct. 13, 2019, in Denver. (AP Photo/Jack Dempsey)

NASHVILLE, Tenn. (AP) — Tennessee coach Mike Vrabel is taking some time before deciding if Marcus Mariota remains his starter or the time has arrived to turn the Titans over to backup quarterback Ryan Tannehill.

This isn't a decision the second-year head coach wants to rush, even though he plans to tell both quarterbacks and the Titans some time Tuesday.

"I just want to make sure that we're going through everything that we need to go through and what we want to do offensively, not use the emotion of the game to make a decision," Vrabel said Monday.

Vrabel benched Mariota in the third quarter of a 16-0 loss in Denver, the first time the No. 2 overall pick of 2015 had been pulled because of his play. Mariota was 7 of 18 for 63 yards, sacked three times and intercepted twice — his first turnovers of the season.

Mariota is being paid $20.9 million in the final year of his rookie contract, but the Titans' offense has managed just one touchdown in the past 10 quarters. The Chargers (2-4) visit on Sunday.

Three-time Pro Bowl tight end Delanie Walker said the coaches will do what they feel is best for the Titans. Asked about Tannehill, Walker said he was an elite quarterback in the NFL a year ago in Miami. Against Denver, Tannehill was 13 of 16 for 144 yards and was sacked four times.

"I don't know what the situation is going to be, but soon enough we'll all find out," Walker said.

Still the defense. The Titans have not allowed more than 20 points in a game this season. They are the NFL's No. 5 scoring defense, allowing 15.3 points a game. Safety Kevin Byard also got his third interception of the season.

"We're trying to get W's," Byard said. "That's the most important stat."

The Titans have scored just 98 points despite a heavy investment this offseason in signing left guard Rodger Saffold and receiver Adam Humphries and drafting new starting right guard Nate Davis and receiver A.J. Brown. Only Washington (90) and winless Cincinnati (97) and Miami (42) have scored fewer points through at least five games. They also have allowed an NFL-worst 29 sacks.

Tennessee lost by two points in Week 2 to the Colts with the defense giving the Titans a chance to win each of the past two games if only the offense could find the end zone. The Titans also were held to a season-low 204 yards in Denver.

"It's just a lot of self-inflicted wounds," receiver Corey Davis said. "Guys just being out of character and not being us. We got a lot of talent no doubt. No reason we shouldn't put up a lot more points than we been showing."

Jeffery Simmons. The first-round pick at No. 19 overall will practice starting Wednesday as the Titans check to see if it's worth activating the defensive tackle out of Mississippi State, possibly in time to play Sunday. Simmons tore his right ACL in February preparing for the draft, an injury that dropped him out of consideration as a possible top five selection.

Dion Lewis. The running back who signed a four-year deal in March 2018 had only one carry and lost a yard. Dalyn Dawkins, newly promoted from the practice squad, got two carries and subbed in ahead of Lewis.

Vrabel didn't have an update on starting inside linebacker Jayon Brown, who hurt a groin muscle early in Denver and didn't return. The Titans played without outside linebacker Cameron Wake (hamstring) for a second straight game, and linebacker Sharif Finch (left shoulder) has missed all but two snaps of the past two games.

3 — Mariota is the third quarterback drafted by Tennessee within the first eight picks since 2006. Vince Young was let go after five seasons after being the No. 3 pick overall in 2006. Jake Locker retired after four seasons despite being the eighth overall pick in 2011.

The Titans have hopes of getting to .500, hosting a pair of 2-4 teams starting with the Chargers, then Tampa Bay. After that, seven games are against teams currently with winning records, including Kansas City, New Orleans and a pair against AFC South leader Houston.