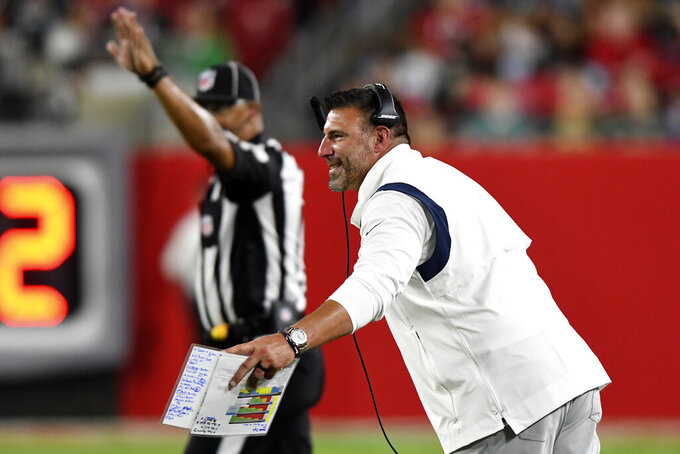 Vrabel told reporters he woke up with a sore throat and an earache. He went to the team headquarters Sunday morning to be tested, and the result came back positive. Another rapid test also turned up positive, so Vrabel was given a PCR test, which he expects will return Monday as positive.

“This isn't the first time that we've gone through this, so whatever the protocols are we'll follow them exactly how they're laid out,” said Vrabel, who disclosed this spring that he was vaccinated.

The Titans beat the Tampa Bay Buccaneers 34-3 in a preseason game Saturday night. They traveled to Florida on Tuesday and practiced jointly with the Buccaneers on Wednesday and Thursday.

Vrabel originally was scheduled to meet with reporters in person, but the availability was pushed back an hour and conducted remotely by Zoom. Vrabel wouldn’t say if others also were in quarantine. He said the Titans would have updates on Monday.

“As of now, I don’t think that anybody that has been tested this morning has tested positive,” Vrabel said.

Under NFL protocols, Vrabel must have two negative test results within 48 hours to go back to work inside the Titans' headquarters or remain in quarantine for 10 days. That could keep him away until Sept. 1. The Titans open the season on Sept. 12, hosting Arizona.

Vrabel said he would figure out who would run the team while he's limited to attending meetings remotely, though he is comfortable with special teams coordinator Craig Aukerman filling the role. Inside linebackers coach Jim Haslett and senior defensive assistant Jim Schwartz both are former head coaches.

“So there’s a lot of guys that we could lean on in that capacity,” Vrabel said.

The Titans had the first COVID-19 outbreak during the NFL season last year. The NFL postponed two Tennessee games and later fined the team $350,000.

Vrabel made clear he didn't want to take away from what he saw in the Titans' win over Tampa Bay even with so many starters watching from the sideline.

“Watching the tape after the game just really proud of a lot of those guys that competed,” Vrabel said. "And that’s what I want this to be about. And I’m sorry that it’s it’s not.”

The Titans (2-0) have not allowed a touchdown through two preseason games, outscoring their opponents 57-6. They host Chicago (1-1) on Saturday night.

Rookies Caleb Farley and Elijah Molden made their NFL debuts against the Bucs with Molden, a third-round draft pick, starting as a third cornerback. Farley came off the bench and played 16 snaps as he recovers from back surgery in March.

Molden not only led the Titans in tackles, he had a sack and two tackles for loss while also forcing a fumble.

“That was really cool to see,” Vrabel said. "The blitz was amazing. He kind of popped underneath two guys and we said it should have been a caused fumble. But we’re not nitpicking.”

Sam Ficken moved closer to winning the job at kicker, taking advantage of Tucker McCann missing the past week after hurting his right foot in the preseason opener. Ficken made field goals from 48 and 58 yards and had five touchbacks on kickoffs.

Vrabel said Ficken hasn't done anything to hurt himself.

“I think his leg has gotten even stronger since he’s got here,” Vrabel said. “And I asked (assistant coach) James (Wilhoit), ‘Is it stronger or is he just hitting it with more confidence?’ And James thinks that he’s just swinging with more confidence because it clearly looks like like a stronger leg to me.”