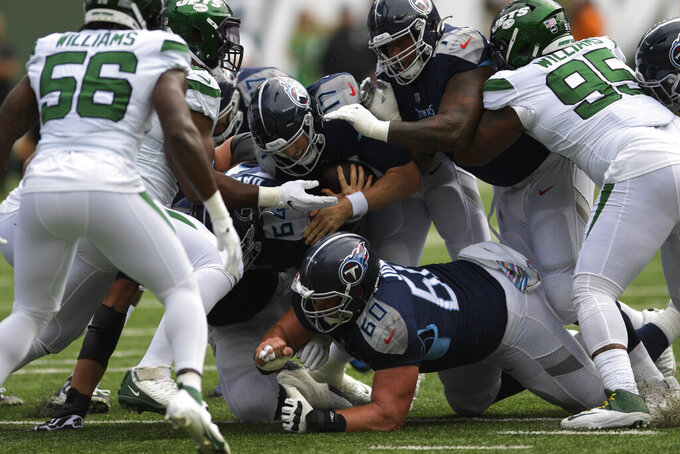 Tennessee Titans quarterback Ryan Tannehill (17) runs the ball during the first half of an NFL football game against the New York Jets, Sunday, Oct. 3, 2021, in East Rutherford. (AP Photo/Bill Kostroun)

NASHVILLE, Tenn. (AP) — The Tennessee Titans are having serious issues protecting their quarterback.

After being sacked only 24 times all of last season, Ryan Tannehill has been taken down 17 times — most in the NFL through four games. Only Carson Wentz of Indianapolis (35) and New England's Mac Jones (34) have been hit more than Tannehill (32).

Not only is Tannehill taking a beating, it's a big reason why the Titans are off to a 2-2 start. And there's plenty of blame to go around.

“It’s been everyone,” Tannehill said Wednesday. “I don’t think you can pin it on any one group or any one person. I think everyone has played a part and as a group, we just have to clean it up. We’ve had opportunities and we’re this far away for a lot of reasons on different plays.”

The Titans are moving the ball well on offense. They rank ninth averaging 394.5 yards a game and fifth in time of possession. They're third in first downs per game.

But a team that scored touchdowns 75% of trips inside an opponent's 20 is converting only 50% this season. The Titans were just 2 of 5 in that area in last week's 27-24 overtime loss to the previously winless New York Jets.

“We’re moving the ball well. We’re getting first downs, we’re sustaining drives, but we got to be able to score in the red zone,” Tannehill said. “So it’s going to be key for us not only this week, but as we move forward, just being able to put sevens up when we get down there.”

The easiest finger to point when a quarterback is sacked is at the offensive line. Coach Mike Vrabel said it's three keys to throwing the ball: Wide receivers have to get open, run the right routes and recognize when defenses are playing man or zone. Protection has to hold up, and the quarterback has to get rid of the ball.

When a quarterback starts to get hit, he wants to get rid of the ball faster with receivers not always open that quickly.

“Hopefully we can tie that all into the pass game and not get our quarterback hit and be able to make some plays there,” Vrabel said.

Protecting Tannehill should be easier Sunday when Tennessee visits the Jaguars (0-4). Jacksonville has just five sacks, fewest in the NFL.

Three of the Titans' starting offensive linemen were on Wednesday's injury report. Left tackle Taylor Lewan did not practice because of an injured toe, while center Ben Jones (neck) and left guard Rodger Saffold (concussion protocol) were limited.

The only difference on the offensive line is a new starter at right tackle in David Quessenberry. The Titans played the Jets with both starting wide receivers Julio Jones and A.J. Brown out with injured hamstrings. Brown returned to practice Wednesday but was limited.

Lewan said he's made a mistake whenever someone beats him. Giving up a season-high seven sacks to the Jets made very clear the Titans must play better.

“We have a large responsibility to protect Tannehill, and we obviously didn’t do a good enough job of that this past week ...,” Lewan said. “We just got to clean up a couple of things.”