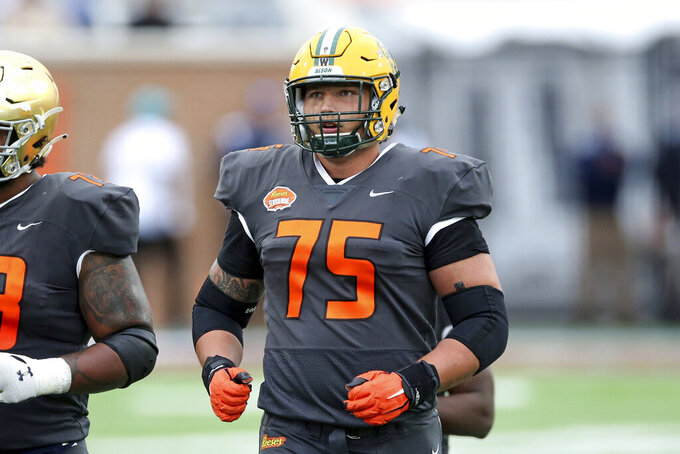 FILE - National Team offensive lineman Dillon Radunz of North Dakota State is shown during the second half of the NCAA college football Senior Bowl in Mobile, Ala, in this Saturday, Jan. 30, 2021, file photo. There’s a common thread linking most of the Football Championship Subdivision players who expect to hear their name called in this month’s NFL draft. They didn’t participate in their schools’ pandemic-delayed spring season. (AP Photo/Rusty Costanza, File)

NASHVILLE, Tenn. (AP) — The Tennessee Titans hope to make up for their first-round mistake a year ago with the selection of offensive tackle Dillon Radunz of North Dakota State, taking him with the 53rd overall pick Friday night in the NFL draft.

The Titans traded offensive tackle Isaiah Wilson in March after drafting the Georgia lineman at No. 29 overall in 2020. The lineman played only four total snaps as a rookie before being suspended, then placed on the injured reserve/non-football injury list after being drafted to replace Jack Conklin who left in free agency.

That's why the Titans tried again to fill that spot on the offensive line, making Radunz their third pick in either the first or second round since 2016 at the position.

“Tackle is a premium position in the National Football League,” general manager Jon Robinson said. “I think that’s a position that resources are allocated toward, and we're going to keep looking and keep trying to add football players at that position that we think can come in and contribute to the team and help us win.”

“I listen to his show all the time,” Radunz said of Lewan's “Bussin' With the Boys" podcast. "I hope to emulate what he brings to the Titans and just that aggressive style of football to that offensive line, so yeah again I hope I can go there, fit in. Super happy with this pick for me."

The defending AFC South champs opened this draft Thursday night bolstering their defense with cornerback Caleb Farley out of Virginia Tech at No. 22. Robinson traded the No. 85 pick to Green Bay for the 92nd overall pick where he selected Georgia inside linebacker Monty Rice and also No. 135.

They went defense for the third time in the first four picks by taking Washington cornerback Elijah Molden, son of former NFL cornerback Alex Molden, at No. 100. Robinson said they tried to trade up a couple of times but couldn't get high enough.

The Titans now will have six more selections Saturday still needing a wide receiver or two, tight end and kicker. They lost starting receiver Corey Davis in free agency to the Jets, and Robinson was asked if he has talked with the Atlanta Falcons about possibly trading for wide receiver Julio Jones.

“I'm not going to comment about any talks that we might've had with other teams regarding players,” Robinson said.

The focus on defense came after the Titans won the AFC South and hosted their first home playoff game since 2008 almost in spite of their defense. They had just 19 sacks last season and were last on third-down conversions. They ranked 28th in total yards allowed and 29th in passing yards allowed per game.

On offense, the 6-foot-6, 301-pound Radunz was an FCS All-American as a junior who started 16 games at left tackle. He played North Dakota State's lone game last fall, then went to California to start prepping for the Senior Bowl and the NFL draft working with former NFL linemen such as Joe Staley.

Radunz said he's been working on switching his stance to play right tackle in the NFL. He believes he'll fit well in the NFL having blocked in a power-run scheme at North Dakota State and also pass blocking for Trey Lance, the No. 3 overall pick by San Francisco.

Having a chance to block for All Pro and AP NFL Offensive Player of the Year Derrick Henry is another added attraction. Henry ran for 2,027 yards in 2020 and could have a chance to top the NFL record of 2,105 set by Eric Dickerson in 1984 with a 17th game this season.

“Whatever I can do to to contribute to help him get that, he’s an awesome running back, it's going to be an awesome offensive line and just excited to contribute,” Radunz said.

The 6-foot Rice played 47 games for Georgia where he had two sacks and forced three fumbles. He was All-SEC First Team in 2020 as Georgia's third-leading tackler. Molden was All-Pac-12 last season and had five interceptions over his last two seasons in college.